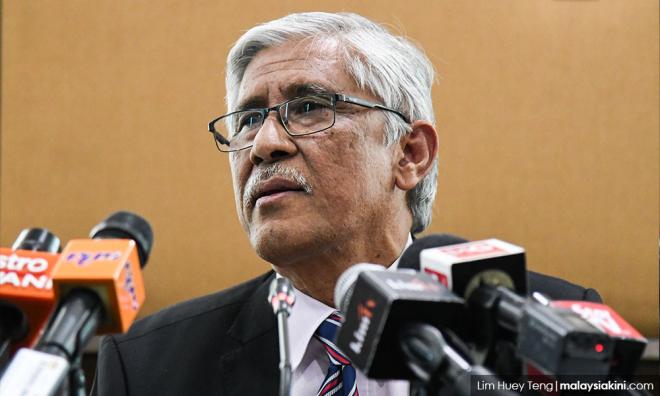 Fairfax Group CEO Michael Hershman revealed that in 2015, then MACC chief Abu Kassim Mohamed had asked him to set up a meeting with the US Attorney's Office in New York so that he could pass them the 1MDB investigation papers.

He claimed that Abu Kassim (above) was also placed under surveillance at the time and forced to resign later.

"When the AG confronted the PM, he was forced out of office and replaced by a friend of Najib’s. At the same time, Abu Kassim was placed under surveillance and pressured to resign from office,” he told Al Jazeera.

According to Hershman, it was at this point that Abu Kassim approached him for assistance.

"Abu Kassim, whom I have known for many years - he and I served together on an Interpol anti-corruption commission - asked if I would pass on documents to the US Attorney's Office in New York and arrange for a secret meeting with him so that he could be assured that an entity outside of Malaysia would continue this investigation.

"I did provide that information, I did set up that meeting. Unfortunately as a result, he was faced with charges of treason (sic)" he added when commenting on the audio recordings of Najib's telephone conversations on the 1MDB scandal released by the MACC on Wednesday.

It should be noted that Abu Kassim, who was replaced as MACC chief on Aug 1, 2016 by Dzulkifli Ahmad, was not charged with treason.

Dzulkifli is one of the individuals whose voice was heard on the audio recordings.

Others included conversations between Najib and high-ranking individuals from the United Arab Emirates, concerning the US Department of Justice's 1MDB civil forfeiture suits and funds channelled to the former premier's stepson Riza Aziz.

There was also a recording of a conversation between Najib and his irate wife Rosmah Mansor.

Commenting on the recordings, Hershman called them "extraordinary."

"It is extraordinary and it came out of left field. The trial is ongoing in Malaysia, many documents have been entered into evidence, witnesses called and statements made.

"But no one expected to uncover these sort of taped conversations between the highest government officials in two jurisdictions.

"We don't know who made them, whether it's intelligence services or a source from the UAE, but regardless of the admissibility, this cover-up is a model of what not to do," he said.

Describing the 1MDB scandal one of the largest thefts in the history of governmental corruption, Hershman said while it remains to be seen if Najib would be found guilty, the evidence as overwhelming.

In Sept 2015, Hershman, in his capacity as an International Anti-Corruption Conference (IACC) council member, had urged Najib to come clean on the RM2.6 billion donation that he received.

Hershman said then that the truth would eventually emerge and any attempt at a cover-up would not work.

"My advice to the Malaysian prime minister was not to cover up, not to obstruct justice because it doesn’t work.

"Tell the truth. Where did the money come from? What was its intended use and if he did something wrong, ask for forgiveness and face the consequences," he said.

Reiterating this during his interview with Al Jazeera, Hershman said the alleged 1MDB cover-up was one of the worst he had encountered.

"In 2015, I specifically called on Najib to come clean, but he chose a path of cover-up.

"And quite frankly, this is one of the worst cover-ups I have run into in the course of many investigations that I have done over the years," he added.

After the scandal made international headlines in 2015, Najib has always maintained that he did not abuse public funds for personal gain.