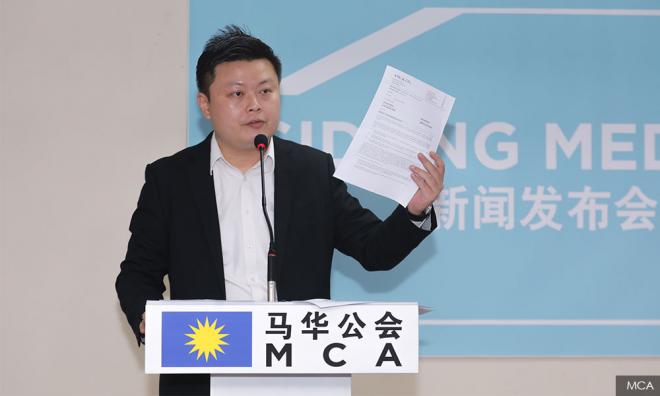 MCA has issued a legal letter demanding Keranji assemblyperson Chong Zhemin to apologise and retract his statements alleging that the party had misappropriated RM150 million intended to build the Kampar Hospital.

In a statement today, MCA spokesperson Mike Chong (photo) said Zhemin had been given many opportunities to apologise, but he did not respond despite a police report lodged against him.

“Our advice fell on deaf ears as (Zhemin’s) behaviour only worsened. To put an end to this madness, we are taking legal steps so that the truth will come to light,” Mike said in a statement today.

In the letter of demand sighted by Malaysiakini, Zhemin is given seven days to comply with MCA’s demand for an apology and retraction.

The letter dated Jan 8 said Zhemin must also pay damages for allegedly defaming MCA and give a written undertaking not to repeat his claims.

“Failing which we have our client’s strict instruction to proceed with legal proceedings for the same without further notice to you, wherein you will be liable for additional costs,” read the letter sent through the law firm Ang & Co.

The letter referred to Zhemin’s blog post published on Jan 3 titled “MCA hijack RM 150 million allocation by cancelling Kampar government hospital to build Utar private hospital”, which MCA claimed to be completely unfounded and is defamatory to the party.

“The impugned words constitute a very serious libel against our client, disparage our client, and impugn our client’s character and integrity.

“Furthermore, they have caused our client considerable distress and embarrassment,” the letter read.

It also referred to a Malaysiakini article published on Jan 7, where the Health Ministry denied MCA had misappropriated the RM150 million earmarked for the hospital as the money was never disbursed following the cancellation of the project.

For the record, Zhemin had stood by his claims and said the ministry’s statement does not contradict his allegations.

In an immediate response to the letter, Zhemin said the MCA letter was merely an attempt to silence him with legal threats, but he vowed to continue to speak without fear.

He said he would issue an official response to the letter once he receives it and consults with his lawyer.