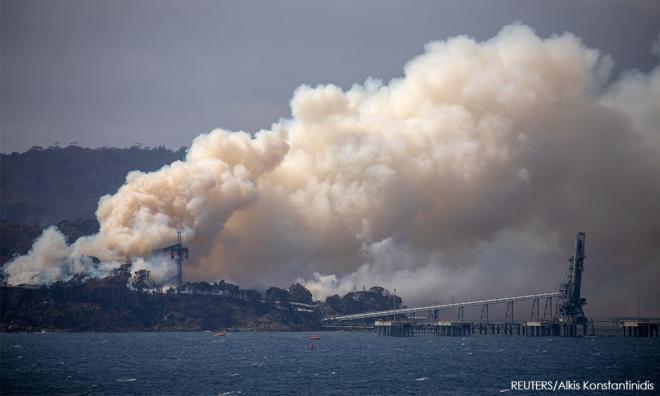 Aussie firefighters get reprieve ahead of more heat

Bushfire conditions eased in Australia today after a gruelling night for firefighters, with authorities saying they expect at least a week of milder weather in which to step up defences against the huge blazes still burning.

Cooler temperatures and rainfall had eased conditions after yesterday's strong southerly wind change that packed gusts of more than 100kph, whipping some fires on the east coast up to the emergency warning level.

The much needed respite was an opportunity to consolidate and try and get the upper hand over the fires, said Shane Fitzsimmons, commissioner of the New South Wales (NSW) Rural Fire Service.

It would appear that we have got at least a week,” Fitzsimmons told a media briefing. “It will probably be the best seven days we have had without a rise of very dangerous fire ratings.”

South Australian fire officials said the situation on Kangaroo Island has stabilised after more than 200,000 hectares had burnt in blazes described as “hell on earth”, by the island’s mayor, Michael Pengill, on Twitter.

Since Oct, 27 people have been killed in Australia and thousands subjected to repeat evacuations as huge and unpredictable fires scorched more than 10.3 million hectares, an area roughly the size of South Korea.

It was reported that one billion animals have been killed or imperilled in the fires.

The Sydney Opera House was expected to illuminate its sails this evening with a display of images from the last three months of the fire crisis, honouring those affected and those fighting the flames.

Despite the respite, authorities were clear, however, that the risk was far from ended.

“The longer-term forecast, or the outlook, rather than a forecast, is for warmer and drier, so we know we have a long way to go,” Andrew Crisp, Victoria’s emergency management commissioner, told reporters.

“It is great to have some respite now, so we can reset and refocus in terms of our operational activities and what we can do to support community, but we will have more hot weather.” — Reuters