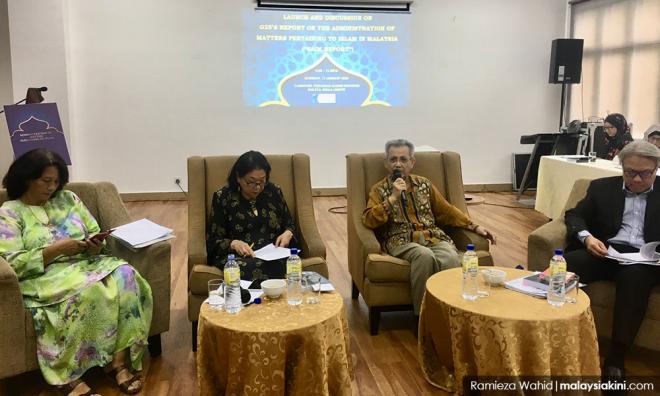 G25, which is a group comprising of retired top Malay civil servants, today questioned the constitutionality of the formation of the National Council for Islamic Affairs (NCIA) and Department of Islamic Development Malaysia (Jakim).

According to the group, there was no stipulation within the Federal Constitution to set up such organisations.

“Matters pertaining to Islam and Malay customs are within the exclusive jurisdiction of the state legislatures and the state executive councils," the group said in its report today.

“Even so, we do appreciate that the intention of establishing the NCIA is to have a federal agency to coordinate and to promote uniformity in the administration of Islamic law among the states,” the group added.

The report, Administration of Matters Pertaining to Islam in Malaysia, was launched at the Persatuan Alumni Universiti Malaya clubhouse in Kuala Lumpur (photo), and presented by working committee chairperson Asiah Abu Samah.

NCIA was formed as the highest national platform to oversee administrative matters pertaining to Islam.

Jakim, meanwhile, serves as the secretariat for the NCIA and sits under the Minister in the Prime Minister’s Department for Religious Affairs Minister Mujahid Yusof Rawa.

The report further stated that as such, the country’s constitution must be first amended to meet the need for such agencies.

G25 also explained that the functions of Jakim, aside serving as the secretariat to NCIA, also included coordinating Islamic development and preaching activities.

“The cabinet entrusts specific functions to Jakim which is not consistent with the constitution,” the report read.