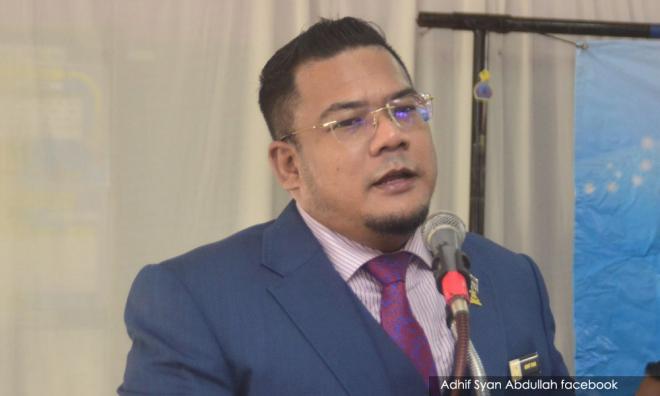 Dengkil assemblyperson Adhif Syan Abdullah has admitted to being at the "wrong place at the wrong time".

However, the Selangor Bersatu Youth chief denied that he was arrested after being tested positive for drugs.

According to Adhif Syan, he was at the "condominium" to attend a discussion and had done nothing illegal.

"I cannot make any comments on the issue because it is under investigation. I have been advised not to do so (comment).

"But I can say that I was at the wrong place at the wrong time... But I wish to stress that I am on the side of truth," he told News Straits Times Press reporters who met him at his residence in Puchong.

Adhif Syan's comments were based on the circulation of an initial police briefing, which stated that the raid took place at the premises of a sports and recreation complex in Puchong where a private party was held on Jan 12.

Among others, the briefing stated that "on Jan 12, at about 4.40am, a corporal and lance corporal on motorcycle patrol duty under the jurisdiction of the Petaling police station received instructions to head towards the Tiara Mutiara 2 condominium in Jalan Puchong, Kuala Lumpur because of loud noise.

"Upon reaching the location at about 4.45am, it was found that loud music was playing in the sports complex."

According to the initial briefing, an anti-narcotics team from the Brickfields district police headquarters went to the scene later.

The Dengkil assemblyperson had told Malaysiakini earlier today that the contents of a viral social media post accusing him of being arrested at nightclub early this morning was not true.

"I was at home. The time, date, location (of the alleged arrest). I don't know where they picked it up from," he said.

The viral post alleged that Adhif Syan was nabbed with 10 others, including officers to several high-ranking government officials, at 1.30am.

He also described the claim as a possible attempt to sabotage him ahead of the party elections.

Reiterating this to NSTP reporters in the afternoon, Adiff Syan said he was puzzled how the initial report from the police was leaked and circulated.

"I don't know if there are other quarters who are attempting to play up this issue," he added.

The assemblyperson also denied that he felt pressured by the incident and vowed to continue his constituents as usual.

Responding to a question on the confusion surrounding his alleged remand and being held in a lock-up, Adiff Syan said this was not true.

"What the people received was the initial report (from the police). But it is not as portrayed.

"I extended my cooperation with the police and returned home late yesterday because of I helped to facilitate investigations," he added.