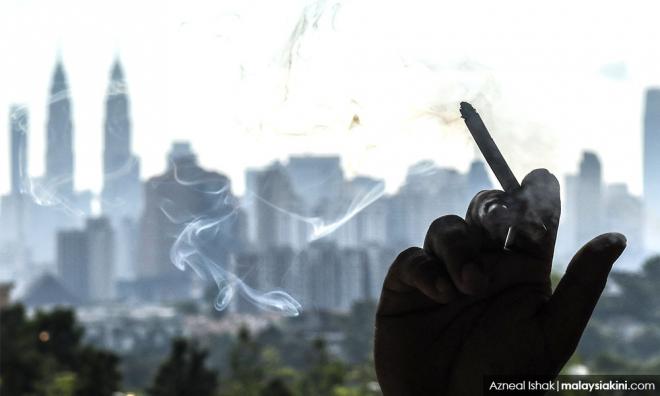 YOURSAY | ‘Why the need to empathise with those who don't want to take care of themselves?’

Zuraida: We support Health Ministry but also empathise with smokers

Newday: Many people smoke (including myself), but the evidence is overwhelming - smoking-related illness kills.

The government cannot have it both ways – the Health Department and Malaysia Medical Association (MMA) has stated one thing and legislation has been enacted (to curb the smoking habit), but now Local Government and Housing Minister Zuraida Kamaruddin wants to “empathise” with smokers and give them a designated area to allow them to continue their habit.

As a government tasked with looking after the welfare of the citizens, it cannot in any way contribute to the proposed smoking huts. If individual cafes want to (build their own) then that is their prerogative.

The only reason the government is being a proponent of smoking huts is the fear of losing smoking voters. This is the wrong reason. I will die earlier due to my 30-year addiction, so are smokers’ votes really worth the curse on our health?

John Doe: Zuraida, why the need to empathise with people who don't want to take care of themselves?

This will lengthen their reconciliation and sends the wrong message to the smokers. If they are too addicted to smoking, they need counselling as there’s something wrong somewhere in the brain.

Gaji Buta: There is nothing wrong with designated smoking areas in the city to prevent people smoking all over the place and polluting others.

Vella: Yes, I rather think of it as a controlled area for smokers. Right now, they are smoking in the car park, mall, office entrances, etc.

I don't blame these old-timers smoking. They took up the drug when the world didn't know better. My uncle died from cancer with a cigarette in his mouth.

The main goal is to separate smokers from the general public. Do this in whatever manner and I'll support it.

I do, however, want the government to ban all tobacco sales to the younger generation. Start this year - everyone born after 2002 isn't allowed to buy any form of tobacco locally.

Behsaikong: I have never smoked, not even one puff; but I and the whole world knows that many others smoke. So keeping smokers and non-smokers apart is the only solution.

Anti-smoking campaigns should be increased. But unless cigarettes are banned and none is sold, then the only way is to keep smokers away from others when they smoke.

Anonymous_1543475877: I, too, am not a smoker but I support Zuraida. It is necessary to have designated smoking areas so that there will not be arguments about where a smoker can smoke.

I agree that smoking is bad for health, but it has not been banned. Why not? Because if you do that you might as well legislate that all vehicles can only be driven on the road at 50kph as any higher speed risks causing accidents and slow speeds prevent serious injuries.

And ban motorcycles too because most fatalities are of those who ride it. And ban drinking - also bad for health and can cause accidents.

QG 007: Ban sugar as well. Sugar seems to have developed a reputation as the big bad wolf in relation to health.

Athena: I think this is a fair statement by Zuraida. I have found in my travels, areas allocated for smokers, both at eateries and in the public space and it works very well.

The fact remains that many are smoking into their old age and yet are still healthy people. The government should be looking at other real bigger killers - excessive sugars and stress. Diabetes is about to engulf this nation just as it has done to India and many other Asian countries.

So it's a good move to allow people to still have their preferences and a country believing in human rights just as other developed nations.

Anon: To all you non-smokers, the moment you step out of your house and start your vehicles, the emissions from your exhaust is more lethal than a cigarette.

The aeroplanes that you travel on kill more people on the ground and cause greenhouse gases.

I can go on and on. So, stop being a hypocrite. Start by not using any type of vehicle.

Tango Bug: Technically, that’s correct. It’s the particulate aerosols that cause harm regardless of its origin.

The odour of cigarette or tobacco itself is essentially something of a personal taste. Like the roasting of meat on an open grill, the deep frying of snacks in the open, all are potentially injurious to health.

Yet, one has a choice whether one wants to be within the vicinity or ban all open sources of these. Surely, the hawkers will agree to this. Especially the makcik (aunty) who sells pisang goreng (fried banana fritters).

QG 007: Life means choosing your poisons. I think that is a fancy way of saying that life is a risk, and risk is inherent in life.

It follows from that maxim that the rules we've been discussing interfere with a fundamental right and civil liberty, namely, the right to choose your own poison.

Liberty is under assault. I used to be a cigarette smoker, most people are not smokers, but it is perilous for us to ignore this assault merely because it is aimed at someone else.

Let's not have to say years from now - "when they came for the smokers, I didn't speak out because I wasn't a smoker".

How long before something you do is singled out by the health fascists? The cigarette may be an unfortunate symbol of today's struggle for freedom, but those of us who value liberty over security, and even over health, must now rally round it.

Unto His Hands: The whole idea behind setting up smoking rooms, huts, etc, has always been to safeguard the non-smokers from the pollution of cigarette smoke and the hazard it poses to the general population.

It’s a given that it is the onus of government to keep the general health of its people and to nurture a healthy nation.

The non-smokers deserve to be protected from smokers. It is the smokers who need to comply.

“Their (the smokers) needs should be considered,” said Zuraida. I disagree, the smokers want to smoke, it is not a need.

Your consideration in setting up these huts should be on ensuring the non-smokers their right to a healthy environment which will not be compromised while emphasising to smokers that they must adapt and adhere to the implementation of your campaign. And that’s that, it should be non-negotiable.

Smokers can convert their homes, cars, backyards into smoking huts if they want. That I can encourage.

Annonymous: This is most shocking. While the Health Ministry and the civilised world is doing justice to ban smoking and reduce pollution, protect and promote a safe and healthy environment for our children and their future, Zuraida is doing the opposite by throwing millions in taxpayers’ money to build smoking huts.

Is it because certain politicians want to cater and pander to their own tribe where the majority are smokers, under the guise of smokers' rights?

What is Zuraida’s priority? To provide smoking huts which will send out a message to our kids that it is your right to smoke (and kill yourself and poison our air) as her ministry will protect your rights, building nice smoking huts for you to do so?

Does it make her a great role model by building these huts to protect our children from toxic fumes as the smokers puff away at the designated area?

Kamapo: I have been to Davao in the Philippines a few times and the whole city is a smoke-free zone.

Zuraida seems to care more for electoral votes than the health of citizens to boost up public health costs and to increase even more congestion in hospitals (by allowing people to smoke and an open space for them to do it).