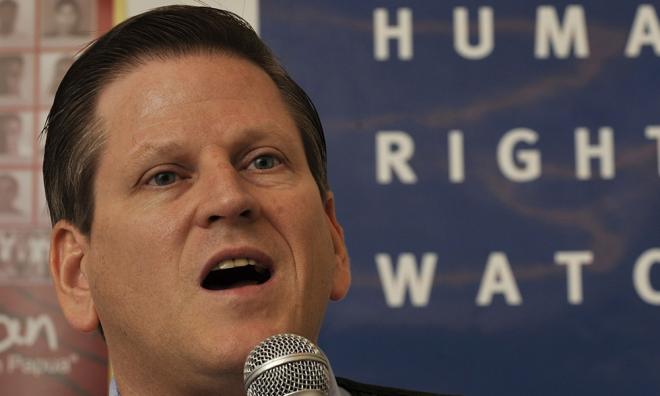 The human rights reforms promised by the Pakatan Harapan government stalled in 2019 as it either backed away from or delayed action on its campaign commitments, global watchdog Human Rights Watch said in its World Report 2020 which was released today.

“Malaysia’s reform process is failing because the ruling coalition’s leaders have lacked the political will to stand up for principles in the face of political opposition,” said Phil Robertson (above), deputy Asia director at Human Rights Watch.

“The government needs to make a renewed effort to follow through on its promises for human rights reforms.”

The report acknowledges that the Malaysian government has undertaken some positive reform steps, such as repealing the Anti-Fake News law, advancing a draft law to establish an Independent Police Complaints and Misconduct Commission, and strengthening parliamentary independence to consider rights issues.

The report also highlights the government's failure to accomplish reforms in key areas such as freedom of expression, freedom of religion and the rights of lesbian, gay, bisexual and transgender (LGBT) people.

Tellingly, it highlights Malaysia's withdrawal from the Rome Statute of the International Criminal Court in April, barely a month after becoming a formal party to the treaty.

The report also zeroes in on the government's retreat from a commitment to completely abolish the death penalty. The government recently asserted that it would instead introduce legislation to end the mandatory application of capital punishment for various crimes.

Both the IPCMC Bill and death penalty amendments are expected to be tabled once Parliament resumes sitting in March this year.

The Human Rights Watch report also pinpointed the Harapan government's failure to carry out commitments to abolish or reform a range of repressive laws, including the Sedition Act and Security Offences (Special Measures) Act (Sosma).

It highlighted the use of Sosma in the detention of 12 people, including two DAP lawmakers, on allegations of supporting the defunct Sri Lankan rebel group the Liberation Tigers of Tamil Eelam (LTTE).

Also cited was discrimination against the LGBT community, which came to a fore in November last year when five men were sentenced to prison terms and six strokes of the cane for “attempted intercourse against the order of nature.” Four of them were caned on Nov 19.

“The Malaysian government’s human rights record will be judged on its accomplishments, not its promises,” Robertson said. “The government can still turn its record around by standing up and acting on behalf of the country’s marginalised communities.”