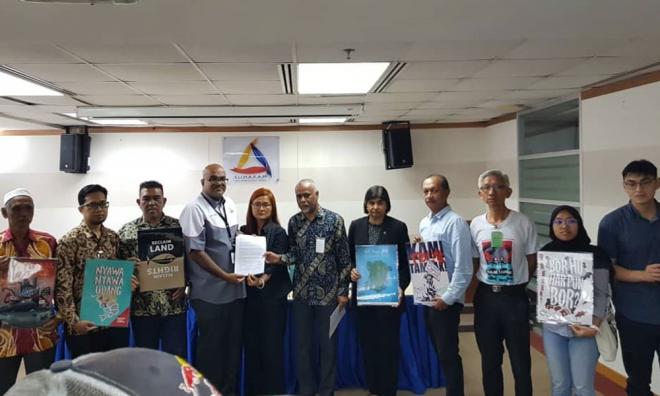 Penang Rejects Reclamation, a group of NGOs and fisherfolk associations, have submitted a memorandum to the Malaysian Human Rights Commission (Suhakam) to plead for their help to stop the Penang South Reclamation (PSR).

Organised by Suaram, the memorandum is supported by 38 organisations.

A petition addressed to Prime Minister Dr Mahathir Mohamad calling for the reclamation to be halted has collected some 250,000 signatures since it was started last year.

The group - a collaboration between Penang Forum and Penang Fishermen Association - urged Suhakam to advise the state government, developer, and fishery authorities to respect the fishing communities' right to "Free, Prior and Informed Consent".

They called on the state government to hold fair and transparent negotiations by involving all stakeholders, urging the authorities to respect the proses of consensus between the groups.

"Any attempt by any party to disallow the collective standing of the Penang Fishermen's Association through, for example, one-on-one negotiations and offering of incentives, or to impose undue pressure through acts of mala fide such as intimidation, coercion, or abuse of power in the removal of subsidies or common rights, obstructing access to fisheries, arbitrary actions to downgrade or disqualify any fisherman, deny the right to freedom of association, or otherwise restrict the fishermen's union by any means, should be warned and investigated," the memorandum read.

"We urge Suhakam to ensure that local fishermen are not denied their rights to the fisheries resource area that has been their source of livelihood for generations," the memorandum added.

They also called on Suhakam to conduct a full investigation of the Penang and Perak fisheries problem threatened by the South Penang Reclamation project.

The group also urged political representatives, governments, civil society and the general public to recognise that coastal reclamation is an issue of environmental justice involving tens of thousands of fishermen.

They asked that the rights coastal fishermen be protected by prohibiting reclamation as stated in the National Physical Plan 2020.

"Environmental justice is to ensure that low-income communities do not suffer the effects of pollution, environmental degradation and climate change," the group insisted.

Located on Bayan Lepas, the islands, which will supposedly be "smart and green", are targetted at property buyers and investors, but activists claimed it will marginalise the lower income group, as well as future generations.

The memorandum raises five points on environmental justice which involves traditional and coastal fisherfolks, who should be the concern of the Penang government, as the implementor of the project.

The group said the PSR will jeopardise the livelihood of 4,909 fisherfolk and 511 fish farmers.