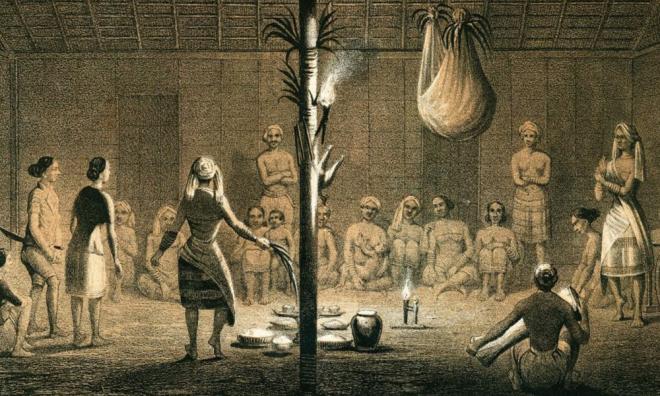 A divinely-inspired gender: The manang bali shamans of Sarawak

COMMENT | Nestled in the heart of Malaysian Borneo were the manang bali, a group of gender non-conforming shamans from the indigenous Iban tribe.

They probably no longer exist due to mass conversions from animism to Christianity. Nevertheless, their historical presence holds present-day Malaysia accountable for its failure to recognise and appreciate its non-cisnormative and non-heteronormative past.

The reality that the manang bali existed and were once lauded for their spiritual roles, challenges and disrupts today’s state-sanctioned transphobic and homophobic rhetoric.

Spiritual intermediaries – such as shamans, mediums, witch doctors, ritualists and healers – who manifest gender non-conformity, reside in many corners of Asia. These include the Ngaju Dayak basir of Indonesian Borneo, the bissu of the Indonesian Bugis people, the nat kadaw of Burma and the hijra of India.

The manang bali were one among many types of manang, albeit a minority group of shamans. They are also referred to as "transvestite" or "transformed" shamans, although researcher Penelope Graham uses the latter term to denote her preference for a more open-ended approach in trying to understand these gender non-conforming individuals.

This detail is important to avoid a simplistic and anachronistic interpretation of these shamans as transgender, intersex, genderqueer or cross-dressing individuals.

While there were female-bodied manang bali who lived as men, the majority were biological males who lived as women.

According to existing resources, the manang bali received directives through dreams, from the transformed petara or deity Menjaya Manang Raja to become shamans.

They must obey, or face the pain of death or madness. As part of responding to their spiritual calling, male-bodied individuals adopted the mannerisms, attire and lifestyle of women, even taking on male partners as husbands.

The gender and sexual transitions that occurred were integral to the initiation process of the shaman, adopting a new personal and social identity in order to serve the community. Due to these extreme requirements, the manang bali occupied the highest ranks of shamanhood.

Like other manang, the manang bali possessed a human body (tuboh). Nevertheless, as exalted beings, they were believed to have the ability to interact directly with the soul (semengat) as well as the "plant aspect" (ayu or bunga) or health dimension of a person, and with spirits or ghosts (antu). Thus, they had the ability to pierce the sebayan or spirit world.

The manang bali were most sought after for their healing abilities. They are said to have received this trait from their patron Menjaya Manang Raja who possessed the "ubat penyangga nyawa" (a cure).

Nevertheless, the manang bali did not experience unanimous acclaim despite their prowess as spiritual mediators. While they were appreciated for their services and well remunerated, they were simultaneously "devalued as lacking social prestige and even an object of ridicule in Iban eyes".

Iban social systems are based on strict gender binaries, and gender transitioning would not have been commonplace. Hence, the manang bali would have caused a sense of unease in the Iban communities despite their divinely-inspired gender status.

All too often, Malaysian leadership experiences convenient amnesia about the historicity of Malaysia’s gendered and sexual diversity. Revisiting the manang bali provides an opportunity to reconnect with what political scientist and historian Farish A Noor refers to as "a deconstructive form of political history".

This form of history gives voice to a dimension of Malaysian reality that has hitherto been overlooked or suppressed, often due to – I add – narrow interpretations of religious modernity.

Gender non-conformity may not be the norm for early Iban communities. Nevertheless, they were accepting and appreciative of the manang bali because they realised that the transformed shamans were an integral part of their communities who had many gifts and talents to offer.

What would happen, I wonder, if present-day Malaysians of all gender and sexual persuasions courageously took a leaf out of the history book of the Ibans, and learned ways of living together in mutual respect and appreciation in the midst of persistent and irreconcilable differences?

JOSEPH N GOH is a lecturer in gender studies at the School of Arts and Social Sciences, Monash University Malaysia. He holds a PhD in gender, sexuality and theology, and his research interests include queer and LGBTI studies, human rights and sexual health issues, diverse theological and religious studies, and qualitative research. This article was originally published in Queer Lapis.