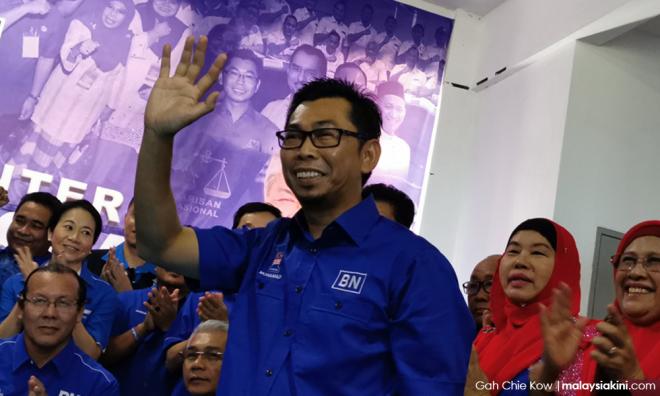 This wraps up Malaysiakini's coverage of the Kimanis by-election.

10.05pm - Sabah Umno chief Bung Moktar Radin believes the victory in Kimanis marks the resurgence of his party in the state.

He adds the magnitude of the victory surprised him.

"I believe Umno Sabah will rise up from our past mistakes. We will correct the mistakes of Sabah Umno and BN and work with the local parties to face the 15th general election," he says.

Speaking at a press conference at the tallying centre in Beaufort, he adds that the victory is not only for the people of Kimanis but for all Sabahans.

Sabah Umno has been reeling from defection since the last general election but managed to pull together the fractious opposition including former BN allies and parties that described themselves as the "third force".

BN's winning candidate Mohamad Alamin thanks the BN leadership and former prime minister Najib Abdul Razak for their support in the by-election.

"I would also like to thank the former Kimanis MP (Anifah Aman) for assisting BN," he says.

He also thanks voters for their wise decision as well as his Warisan opponent Karim Bujang.

Najib: Warisan should take a cue from Kimanis and scrap PSS

10pm - Former prime minister Najib Abdul Razak, who is also the BN advisory board chairperson, says the Warisan-led Sabah government should take a cue from the Kimanis by-election and scrap the Sabah Temporary Pass (PSS).

The PSS is a document the Sabah government plans to issue to undocumented migrants in a bid to rein in their presence in the state.

However, the BN has used it as campaign fodder to raise concern that it may be used to set a path of citizenship for the undocumented migrants.

"With the clear majority, it is apparent that the voters reject the government's intention to introduce PSS," he says.

"We have received the results and we accept the decision. Congratulations to the winning candidate and continue to serve.

"But I believe in Sabah, under the leadership of Shafie Apdal and Warisan as well as Pakatan Harapan at the (federal level of) Malaysia, we will step up our efforts.

"It is clear that many of the problems faced by the people are economic problems," he says.

The announcement was made by returning officer [email protected] Etok at the Dewan Datuk Seri Panglima Mohd Dun Banir in Beaufort.

There was a total of 320 rejected votes. The turnout was 79.92 percent, the highest ever for any of the 10 by-elections since GE14.

Kimanis final turnout is highest of all by-elections since GE14

8.50pm - The Election Commission tallies the final turnout for the Kimanis by-election today at 79.92 percent.

This is the highest turnout of the 10 by-elections that have been held since the 2018 general election.

The turnout for previous by-elections are as follows:

8.35pm - BN leaders and the winning candidate Mohamad Alamin arrive at the tallying centre at the Dewan Datuk Seri Panglima Mohd Dun Banir in Beaufort with broad smiles on their faces.

They sit and wait patiently for the official results expected to be announced soon.

There is no sign of Warisan candidate Karim Bujang or Sabah chief minister Shafie Apdal yet.

Tears of joy amongst Umno leaders

8.24pm - There are emotional scenes for Umno leaders Bung Moktar Radin and Abdul Rahman Dahlan (above) as they celebrate an underdog victory.

He says that in the last 19 months, Sabah Umno was almost completely decimated.

"We lost 16 state reps, six MPs, 22 out of 25 division heads due to massive defections. No one gave us a chance. No one believed in us.

"Today is a sweet victory indeed! Allah is great!" he says.

8.20pm - BN leaders are reacting gleefully to the coalition's win in the Kimanis by-election.

'Kimanis apa cerita?' he asks Kit Siang in a Facebook post while displaying the headline of a May 2019 Malaysiakini report entitled "Kit Siang calls Sandakan win a knockout blow to 'Bossku'"

MCA president Wee Ka Siong is also in the mood to celebrate and reminds Pakatan Harapan that BN is in the middle of a hot streak of five by-election wins.

"Although Harapan and Warisan are distributing various 'provisions', even though Harapan has the power of government machinery including the mainstream media, the people have been wise in choosing their representatives.

"The message of the people in Kimanis is the same as in Semenyih, Rantau, Cameron Highlands and Tanjung Piai," he says.

7.25pm - Malaysiakini is calling the Kimanis by-election in favour of BN's Mohamad Alamin.

He has defeated his opponent Karim Bujang from Warisan based on unofficial tallies.

Mohamad Alamin has 11,992 votes giving him an unassailable lead over Karim who has 10,200 votes.

This means that he has more than half the votes of those who cast their ballots today.

7.10pm - BN's Mohamad Alamin (above) is on the verge of sealing a win in the Kimanis by-election.

He has a big lead over his opponent Karim Bujang from Warisan based on unofficial tallies and is on course to take more than half the votes of those who cast their ballots today.

'People not satisfied with government'

6.50pm - An analyst says if BN were to win the Kimanis polls, it would only show that the voters were influenced by the national factor.

"This shows that the unhappiness with the performance of the Pakatan Harapan government has spread to Sabah," says Universiti Malaya sociopolitical analyst Awang Azman Awang Pawi (above).

The people are not satisfied especially with the way the government is handling economic issues, he added.

The people are also unhappy with the implementation of Sabah Temporary Pass (PSS) initiative which will be rolled out in June, said Awang.

Previously, various surveys found that local issues and development matters would factor in the Kimanis polls.

6.44pm - Based on the unofficial count, BN now enjoys a large lead over Warisan and is on course for victory in the Kimanis by-election.

It is estimated that slightly more than 80 percent of eligible voters participated in today's by-election.

6.43pm - Based on the unofficial tally, Warisan narrowly retains the polling district of Simpangan.

Despite the win, it is not a good sign for Warisan as it won comfortably there in the last general election.

Simpangan is mostly made up of non-Muslim bumiputera at around 73.52 percent. The second-largest group are the Chinese.

While the Chinese population only makes up 3.66 percent in Kimanis, its largest concentration is in the Simpangan polling district where they make up around 15.28 percent.

Muslim bumiputera make up nine percent in Simpangan while other races constitute the remaining 2.19 percent.

6.21pm - Based on the unofficial count, BN is now pulling away from Warisan.

It is estimated that slightly more than 80 percent of eligible voters participated in the by-election.

BN slightly ahead in early count

6.06pm - Based on unofficial count, BN has a slight edge over Warisan.

It is estimated that slightly more than 80 percent of eligible voters participated in today's by-election.

5.30pm - The police have cordoned off the surrounding roads to the tallying centre at Dewan Datuk Seri Panglima Mohd Dun Banir in Beaufort.

Dozens of riot police are stationed at the compound of the tallying centre as Election Commission (EC) officers await the arrival of more ballot boxes.

EC officials are either having an early dinner or waiting at the centre in a relaxed manner.

5.17pm - The first ballot box out of a total of 69 arrives at the tallying centre.

5pm - Polls for the Kimanis by-election have closed and counting begins.

This contest is between BN's Mohamad Alamin and Parti Warisan Sabah's Karim Bujang. BN is supported by PAS and local opposition parties while Warisan is backed by Pakatan Harapan.

The campaign began on Jan 4 and lasted two weeks.

The by-election was called after the Election Court voided Anifah Aman's slim 156-vote majority win in Kimanis in 2018 on the grounds that the Election Commission (EC) failed to comply with the proper election procedures.

Anifah sat out of this by-election but is backing BN despite having quit Umno.

There are 29,664 eligible voters in this by-election.

Some facts about the Kimanis by-election