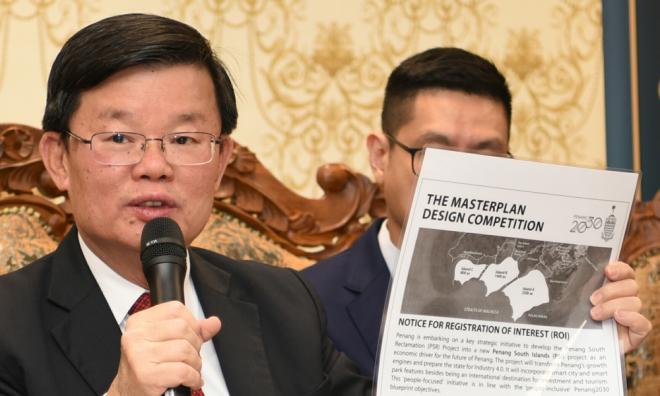 In a statement today, Consumers’ Association of Penang (CAP) and Sahabat Alam Malaysia (SAM) said they were upset with the state government's move to sign an agreement with Gamuda-led SRS Consortium to implement the project.

According to Chief Minister Chow Kon Yeow (photo), the deal is expected to be formalised this month.

The PSR project, when developed, is supposed to cover the cost of the state's proposed RN46 billion Penang Transport Master Plan (PTMP), which includes an LRT network from Bayan Lepas to Komtar.

"The state government is proceeding as if all the approvals will be given and any legal challenge to its project will be decided in its favour regardless of objections by interested parties like the Sungai Batu Fishermen Unit and civil society organisations," said SAM president Meenakshi Raman.

"This makes a mockery of civil society participation in public matters and the legal process to ensure environmental protection and social justice," she added.

A representative of the Sungai Batu Fishermen’s Unit has filed an application in July last year to the Appeals Board.

However, the appeal has not been heard yet.

They claimed the EIA was "incomplete" and had not taken into account the conditions imposed by the Ministry of Agriculture and Agro-based Industry.

They added the project undermines Malaysia’s obligations under the Convention on Biological Diversity.

"These are substantial grounds and the matter could be litigated right up to the Federal Court and could take months," said CAP president Mohideen Abdul Kader.

"So what is the rationale for signing a fresh project delivery partner agreement with the Gamuda-led SRS Consortium?

"Is it to influence the decision of the court by pleading that the agreement has been signed and its consequences in the event of a breach?" Mohideen asked.

"It is highly irresponsible on the part of the government to expose itself to legal suits in the event the RM46 billion PTMP project cannot proceed," he said.

CAP and SAM then called on the state government to appoint an independent traffic consultant firm to study the PTMP and the alternative transport systems proposed by civil society organisations and to implement its recommendations.

"We also urge the Transport Ministry not to approve the elevated LRT project given its exorbitant cost compared to other cheaper alternative modes of transport, and the financial burden the present and future generations will have to bear," the NGOs stressed.

CAP says 'no' to new PDP agreement with SRS Consortium
14 Dec 2019
PSR a 50-year transformation plan, not short-term one: Kon Yeow
8 Nov 2019
Group protests alignment of LRT to near Sg Nibong mosque
4 Nov 2019
RM46 billion PTMP is a risky undertaking that must be reviewed
31 Oct 2019