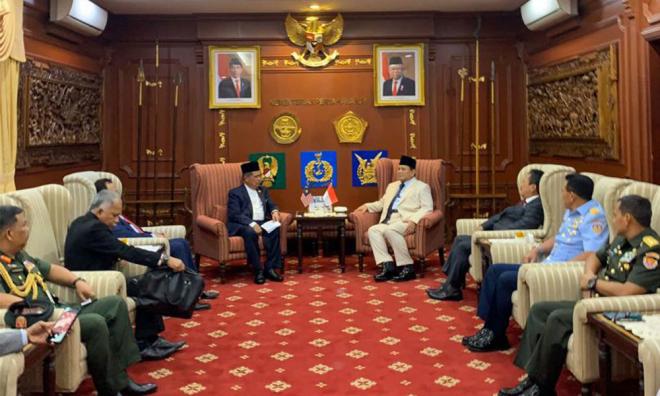 Defence Minister Mohamad Sabu has started his official visit to Indonesia today to further strengthen the defence cooperation between the two countries.

While in the republic, Mohamad called on his Indonesian counterpart, Prabowo Subianto, at the Indonesian Ministry of Defence.

The Ministry of Defence (Mindef), in a statement, said at the meeting, the two ministers had a wide-ranging and open discussion that reflected the strength of the relationship.

Both leaders reiterated their commitments to further strengthen the existing defence cooperation based on mutual interests, as well as working together to develop defence industry cooperation.

“During the meeting, the ministers also touched on the recent kidnapping of five Indonesian fishermen in the waters off Tambisan, Sabah," Mindef said.

On Jan 16, five Indonesian fishermen were abducted from their Sabah-registered trawler in the waters off Tambisan by a group of kidnappers linked to the Abu Sayyaf militant group.

“Both ministers have expressed their confidence in the implementation of the Trilateral Cooperative Arrangement (TCA) between Indonesia, Malaysia and the Philippines in addressing common maritime security threats along the borders of the three countries.”

Both ministers also agreed to meet up with Delfin Lorenzana (the secretary of the National Defence of the Philippines) on the sidelines of the Asean Defence Ministers’ Meeting (ADMM) Retreat next month to further discuss ways to enhance the TCA, Mindef said.

The statement added that Mohamad also extended an invitation to Prabowo to attend the Defence Services Asia Exhibition and Conference (DSA 2020) and the National Security Asia 2020 (NATSEC 2020) scheduled to be held in Kuala Lumpur from April 20 to 23.

Tomorrow, Mohamad is scheduled to attend the "Hope of the New Islamic World: Strengthening Malaysia-Indonesia Relations" programme in Jakarta. — Bernama