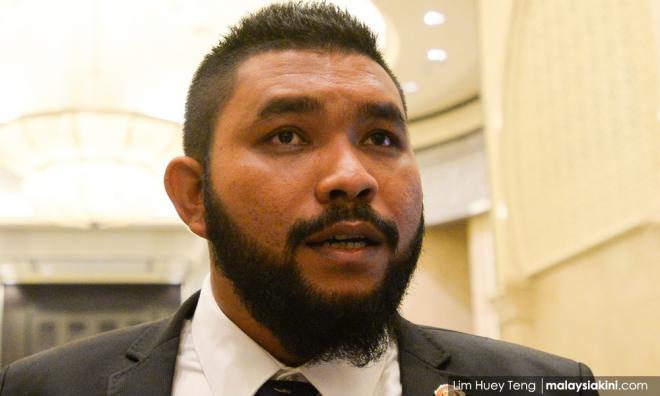 Insp Nur Farah Syuhada Hamdan, 35, from the Royal Malaysia Police (PDRM) forensic laboratory, Cheras, said her examination of the CCTV recording, which was for a few seconds, was not clear because the original video resolution was low.

The fifth prosecution witness said this when referred to the video recording during cross-examination by lawyer Logan Narayanan, representing Papagomo, whose real name is Wan Muhammad Azri Wan Deris, 36 (above).

Nur Farah Syuhada told the court that she received the video recording, which was in DVD form, together with an exhibit request letter for inspection by investigating officer ASP Mohd Radzee Jamudi at 3.15 pm on May 16 last year.

She said it took her 30 minutes to identify the images that the investigating officer wanted.

“After I captured the images, as requested by the investigating officer, an 'enhancement' process was carried out to make the images clearer,” she added.

The video recording was then played for the court.

When asked by Logan if she mentioned the names of the persons in the video recording, Nur Farah Syuhada said no.

“The names were unnecessary because on the instruction by the investigating officer, I was only asked to analyse the act by the two images,” she added.

Cross-examined by deputy public prosecutor Muhammad Hairuliqram Hairuddin, Nur Farah Syuhada reiterated that there was no mention of names in her analysis of the video recording as the analysis was on the act by individuals in the recording.

On Feb 28 last year, Azri was charged under Section 509 of the Penal Code with outraging the modesty of Syed Saddiq by saying "You are stupid" on the sidewalk of Persiaran Impian Perdana, Saujana Impian, at 11.05 am on Feb 16. 2019.