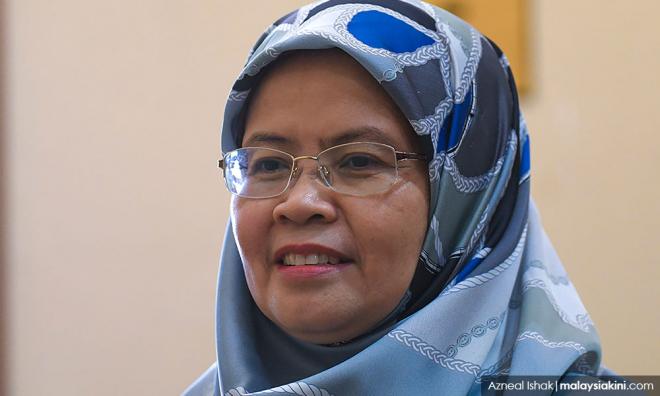 Audit Dept's Nor Salwani gets datukship from king

Nor Salwani became a public hero last November after she revealed she saved the original audit report on the scandal-hit 1MDB as well as keeping a recording of a meeting which allegedly decided to make amendments to 1MDB's final audit report.

Her actions had helped to preserve evidence of alleged tampering with the National Audit Department's report on 1MDB.

Her superior at the time - auditor-general Ambrin Buang - had ordered that all copies of the report be destroyed to prevent leaks. Only the modified copy was submitted to Parliament's Public Accounts Committee.

Nor Salwani is among the 25 recipients of the Panglima Mahkota Wilayah (PMW) which carries with it the title "Datuk".

A total of 188 people were conferred with awards, honours, and medals by the king today in conjunction with the Federal Territories Day.

"Civil servants can't protect public officers or ministers because you hold a responsibility to defend the interests of the nation and its people.

"What Salwani did must be exalted, and that is why we agreed to give her the title," he told reporters in Kuala Lumpur today.

All but one 1MDB report destroyed so Salwani could keep it - Ambrin
27 Nov 2019
Idol of public service - politicians sing praises of Salwani
22 Nov 2019
Yoursay: 1MDB heroine Nor Salwani deserves a medal
21 Nov 2019
Salwani - The person who saved the original 1MDB audit report
21 Nov 2019