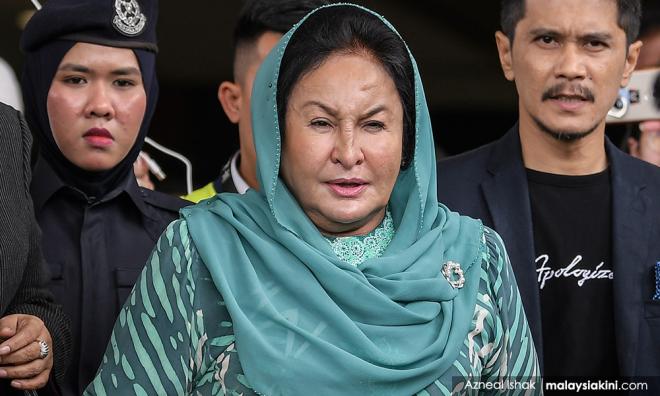 Former prime minister Najib Abdul Razak and his wife, Rosmah Mansor, will make an appearance at separate High Courts in Kuala Lumpur on Monday for their criminal trials.

For Rosmah, 69, it will be the first day of her corruption trial in connection with the supply and installation of solar energy at 369 rural schools in Sarawak, which is before judge Mohamed Zaini Mazlan, while Najib, 67, is scheduled to continue his defence before judge Mohd Nazlan Mohd Ghazali for misappropriating RM42 million in SRC International Sdn Bhd funds.

Rosmah's case will begin at 2pm, while Najib's trial is to start at 9am. Rosmah is facing three counts of corruption involving hundreds of millions of ringgit.

A source said after the prosecution read out its opening statement.

Rosmah was initially supposed to be tried with her former special officer, Rizal Mansor, who was charged with four counts of soliciting and receiving bribes on behalf of Rosmah over the project.

However, on Jan 8, the court acquitted Rizal of the charges after the prosecution withdrew all four charges against him.

On Nov 15, 2018, Rosmah pleaded not guilty in the Sessions Court here to two counts of soliciting RM187.5 million and receiving RM1.5 million for projects to provide solar energy to rural schools in Sarawak.

On the first count, she was charged with dishonestly soliciting for herself, made through Rizal, a gratification, to the amount of RM187,500,000, which is 15 percent of the value of the contract for the project, from Jepak Holdings Sdn Bhd managing director Saidi Abang Samsudin.

It was as an inducement to help the company (Jepak Holdings) to secure the Hybrid Photovoltaic Solar System Integrated Project and Maintenance and Operation of Genset/Diesel for 369 rural schools in Sarawak, worth RM1.25 billion through direct negotiation from the Education Ministry.

She was charged under Section 16(a)(A) of the Malaysian Anti-Corruption Commission Act (MACC) and faces imprisonment for up to 20 years and fine of not less than five times the amount of the gratification of RM10,000, whichever is higher, upon conviction.

On April 10, 2019, Rosmah was charged again in the Sessions Court here with accepting gratification of RM5 million from Saidi through Rizal for helping Jepak Holdings to secure the same project at the same place in Jalan Langgak Duta.

All the cases had been transferred from the Sessions Court to the High Court for trial.

Rosmah is also facing 12 charges for money laundering involving RM7,097,750 and five counts of failing to declare her income to the Inland Revenue Board (IRB). This brings the total number of charges against her to 20.

The case has been fixed for trial in May this year. - Bernama