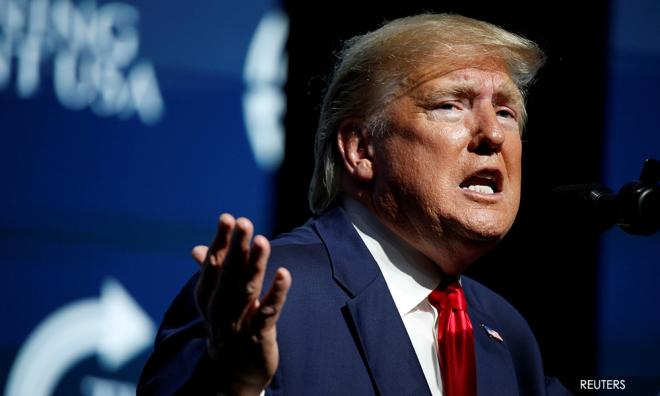 Democrats condemn Trump at trial as threat to American democracy

Even with acquittal seemingly assured, the Democrats prosecuting President Donald Trump in his impeachment trial made a forceful appeal for conviction on Monday, calling him a man with no moral compass who must be removed to protect American democracy.

Congressman Adam Schiff wrapped up closing arguments for the seven US House of Representatives lawmakers who prosecuted Trump in the historic proceedings after the Republican president's lawyers, in their own arguments, called the case against Trump politically motivated, reckless and baseless.

"He has betrayed our national security and he will do so again. He has compromised our elections and he will do so again. You will not change him. You cannot constrain him," Schiff said. "If you find the courage to stand up to him, to speak the awful truth to his rank falsehood, your place will be among the Davids who took on Goliath - if only you will say, 'Enough'."

The Senate impeachment drama neared its conclusion a day before the president is slated to give his annual State of the Union speech to Congress and on the same day that voters in Iowa cast ballots in the first contest in the state-by-state process of choosing the Democratic nominee to challenge Trump in the Nov 3 election.

On Wednesday, the 100-member Republican-controlled Senate is due to vote on whether to remove Trump from office. The Senate seems certain to acquit him. A two-thirds majority is required to remove a president. None of the 53 Senate Republicans has called for conviction.

The Democratic-led House impeached Trump on Dec 18 on charges of abuse of power for asking Ukraine to investigate political rival Joe Biden and obstruction of Congress for blocking testimony and documents sought by lawmakers in their investigation. Trump has called the impeachment effort an attempted coup by Democrats.

In his arguments, Trump’s personal lawyer Jay Sekulow urged senators to "stand firm" against what the defence team called an illegitimate impeachment drive.

"This was the first totally partisan presidential impeachment in our nation's history. And it should be our last," Sekulow said. "What the House Democrats have done to this nation, to the Constitution, to the office of the president, to the president himself and to this body (the Senate) is outrageous. They have cheapened the awesome power of impeachment."

Senator Joe Manchin, a Democratic moderate, said he has not decided on whether to vote to acquit Trump and sees "no path" to the required two-thirds majority. But Manchin predicted that a bipartisan majority in the Senate would vote to censure Trump for his actions, a lesser rebuke.

"Removing this president at this time would not only further divide our deeply divided nation but also further poison our already toxic political atmosphere," Manchin said.

Schiff (above) said America's founders intended impeachment - the power given to Congress under the US Constitution to remove a president for committing "high crimes and misdemeanours" - to be used rarely.

But he said it must be used to remove a president who "would sell out his country for political favour," undermine the integrity of elections and invite foreign interference in American affairs.

"For a man like Donald J Trump," Schiff said.

"He has not changed. He will not change. He has made that clear himself without self-awareness or hesitation," Schiff added. "A man without character or ethical compass will never find his way."

'The answer is elections'

Sekulow said neither of the charges brought against Trump represented an impeachable offence and he accused Democrats of seeking to negate the 2016 election won by Trump and to subvert the will of the American people.

"The answer is elections, not impeachment," Sekulow said.

"The president has done nothing wrong," White House Counsel Pat Cipollone added. "We can, together, end the era of impeachment."

During the trial, Trump's lawyers offered an expansive view of presidential powers and argued he could not be removed for abuse of power. Seizing on these arguments, Schiff told the Senate that if a president cannot be impeached for abuse of power, that would open the door to a range of "utterly unacceptable conduct".

"Trump could offer Alaska to the Russians in exchange for support in the next election, or decide to move to Mar-a-Lago (his Florida resort) permanently and let (son-in-law) Jared Kushner run the country, delegating to him the decision whether to go to war," Schiff said.

Schiff said that Trump, if left in office, would continue to seek foreign interference in November's election, in which he is asking voters to give him four more years as president. Biden is a leading contender for the Democratic nomination to challenge Trump.

"What are the odds if left in office that he will continue trying to cheat? I will tell you: 100 percent," Schiff said.

"A president free of accountability is a danger to the beating heart of our democracy," Schiff said.

Last Friday the Senate voted not to hear any witnesses, such as Trump's former national security adviser John Bolton, who in an unpublished book manuscript depicts Trump as playing a central role in pressuring Ukraine. Only two Republicans, moderates Mitt Romney and Susan Collins, voted to hear witnesses.

Senators will now be able to make speeches on the matter until Wednesday, when a final vote is scheduled at 4pm EST (5am on Thursday in Malaysia) on whether Trump is guilty and should be removed.

Trump is only the third US president to be impeached. No president has ever been removed from office through impeachment. President Richard Nixon resigned in 1974 before the full House could impeach him.