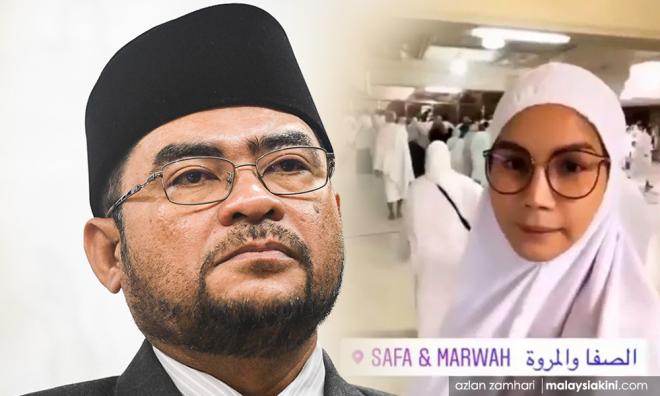 Mujahid Yusof Rawa’s actions in singling out a transgender entrepreneur for action by the country’s multimedia commission was inappropriate for a government minister, a lawyers group has said.

Lawyers for Liberty (LFL) said this was as Nur Sajat, who is also a singer, is an ordinary citizen and enshrined with the right to freedom of expression.

Criticism came after the de facto religious affairs minister called on the Malaysian Communications and Multimedia Commission (MCMC) to probe Sajat for her social media postings on her trip to Mecca.

The minister in the Prime Minister’s Department said MCMC would take immediate action against the entrepreneur as the latter's move to post pictures of her posing in female prayer attire had allegedly caused unease among Muslims.

“This is a heavy-handed response and inappropriate treatment from a government minister towards an ordinary citizen.

“We must remind Minister Mujahid that the right to freedom of expression is enshrined in the Federal Constitution and cannot be arbitrarily limited, save for the purposes of national security, public order or other reasons stated in Article 10(2)(a).

“The feeling of ‘unease’ within a certain category of the public is not a valid justification for limiting Nur Sajat,” LFL legal coordinator Zaid Malek said in a statement today.

“...Neither the minister nor his office should have exerted pressure on the MCMC, which like any other regulatory agency, should be allowed to work with independence from government ministers in accordance with their standard operating procedures.”

Zaid pointed out that Mujahid had a duty to protect the fundamental rights of all Malaysians, regardless of their religion or private beliefs.

He added vulnerable groups such as the transgender community require protection from hate and discrimination.

Aside from his meeting with the MCMC, Mujahid also met with the haj tourism agency that handled Sajat's trip to Mecca to perform the umrah pilgrimage.

The minister insisted Sajat must perform the umrah as a man.