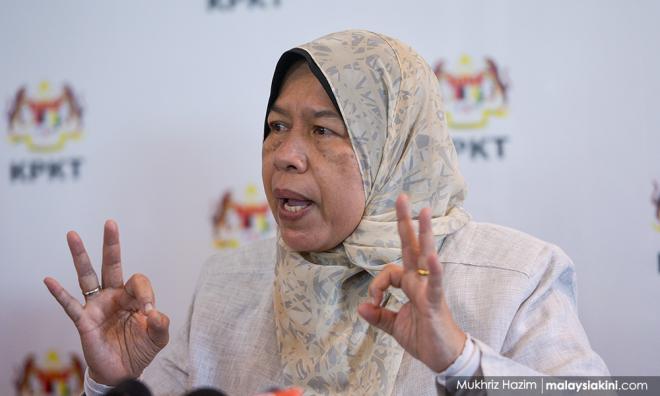 The PKR political bureau has approved party vice-president Zuraida Kamaruddin’s application to take leave from her party post, according to a report.

Chang reportedly said that for the duration of her leave, Zuraida (photo) is not allowed to use her position in any programs at the party’s divisions and branches.

Nevertheless, she may still perform her duties in other capacities within the party, he said.

Apart from being the party vice-president, Zuraida is also the Ampang division chief.

Yesterday, Zuraida’s political secretary Nor Hizwan Ahmad revealed that she had penned a letter seeking leave from her vice-president post and it was sent to PKR president Anwar Ibrahim two days earlier.

This is pending the conclusion of disciplinary proceedings against her.

Nor Hizwan said Zuraida had also sent a letter to the disciplinary committee asking the committee not to take action against her, due to legal notices against her from PKR secretary-general Saifuddin Nasution Ismail and Anwar's aide Farhash Wafa Salvador Rizal Mubarak.

"This is because the legal notices have the same content as the show-cause letter issued by the disciplinary committee," he added.

Zuraida is currently facing disciplinary issues, including a speech at a dinner function on Dec 8 following a walkout after PKR’s heated national congress.

Farhash had sued Zuraida for defamation over remarks made in her speech.

politics
pkr
zuraida kamaruddin
chang lih kang
leave application
Related Reports
Zuraida writes to Anwar, applies for leave from PKR veep post
a year ago
Party veteran among crowd calling for Zuraida's sacking
a year ago
10,000 grassroots in Penang may quit if Zuraida sacked, say supporters
a year ago
Zuraida to keep calm and carry on with duties, says aide
a year ago