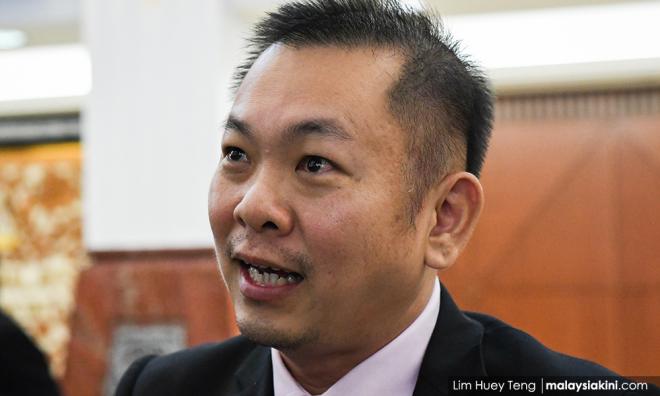 "A motion of confidence in Mahathir as prime minister is laughable if PAS MPs, in reality, do not actually support (his) initiatives," said Chan (above) in a statement today.

Chan was referring to Tuan Ibrahim's announcement that his party plans to move a motion for a vote of confidence for Mahathir when the Dewan Rakyat convenes next month.

It should be noted that Tuan Ibrahim's proposal of such a vote of confidence was mooted in response to "expressed dissatisfaction" with the prime minister's leadership that had yet to manifest itself in a no-confidence motion.

Chan, who is also Sabah DAP secretary said that a much better way to show this support was to back legislation tabled by the prime minister and his Pakatan Harapan coalition.

“April 9 last year was a historic day for us Sabahans and Sarawakians when Mahathir as the sitting prime minister, acknowledged that the amendment to the constitution tabled in 1976 had reduced the position of Sabah and Sarawak to be equal to that of other states in Peninsular Malaysia when that wasn't the intention of our founding fathers

"Therefore, there is the need to amend Article 1(2) of the Malaysian Constitution to restore the status of Sabah and Sarawak back to its original wordings. A bill was tabled just to do that," said Chan, who lamented that the bill tabled by Mahathir in parliament was defeated by 10 votes.

"There were at least 17 PAS MPs who were present during the second reading of the bill, but all of them decided not to support Tun and had abstained in their voting.

"By being present and yet not voting, PAS gave not just Sabahans and Sarawakians, but also Mahathir, a tight slap in their faces!"

Chan said the same bill will be retabled in parliament this year and he hopes that PAS MPs will support it this time.

"This is the best way to show their support towards Mahathir as prime minister and will also help Sabah and Sarawak to be restored to their rightful position under the Malaysia Agreement 1963. If PAS can graciously do so, then clearly the confidence motion is unnecessary and a waste of precious parliamentary legislative time," said Chan.

The PAS proposal, which it claimed would end uncertainties over the promised transfer of power between Mahathir and Anwar which they say was now interfering with the country's political and economic stability, was also made against a backdrop of talk of a new unity government involving Umno, PAS and Mahathir's Bersatu.

The prime minister has since dismissed talk that he is working to form a new coalition with opposition parties.