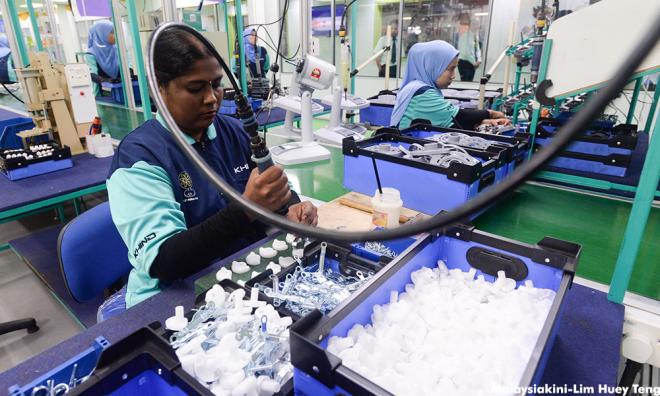 Malaysia's economy grew 3.6 percent in the fourth quarter from a year earlier, the slowest pace in a decade, due to lower output of palm oil, crude oil and natural gas, and a fall in exports amid the US-China trade war.

The coronavirus outbreak in China will put further pressure on the economy this year, particularly in the first quarter, the central bank said on Wednesday after releasing the data.

The Malaysian government, which has forecast the economy to grow at 4.8 percent this year, is already working on a stimulus package for aviation, retailing and tourism because of the epidemic in its biggest trading partner.

The pace of expansion in October-December was well below the 4.2 percent rise forecast by analysts in a Reuters poll, and slower than 4.4 percent in the third quarter.

Full-year growth came in at 4.3 percent, below the government's forecast of 4.7 percent and the weakest since 2016.

"The economy is still being supported by very firm private sector spending, and that is a positive development in our economy. More importantly, private investment might turn around," Bank Negara Malaysia (BNM) Governor Nor Shamsiah Mohd Yunus told a news conference.

"But there are downside risks. It's very difficult to predict how long it will take before (the virus) is contained... there are so many moving parts, but we do acknowledge it will impact us in the first quarter."

Malaysia's economy, like many in Asia, came under heavy pressure last year from the escalating Sino-US trade war and softening global demand. The mining sector was particularly hard hit, and BNM responded with a preemptive cut to its benchmark interest rate in January.

While China and the United States agreed a preliminary deal last month, the fast-spreading epidemic has raised fresh global growth risks and heightened expectations of more stimulus in some of the more vulnerable economies.

Demand in China has slumped as the outbreak causes widespread business disruptions, and global tourism visits by mainland Chinese are down sharply as Beijing looks to contain the spread of the virus.

"The stimulus package will comprise of a number of measures. We have to look at the most optimum policy mix that would support the private sector, but at the same time ensure fiscal sustainability of the government continues to be sustained," Nor Shamsiah said.

BNM said headline inflation in 2020 is expected to average higher than in 2019, but remain modest.