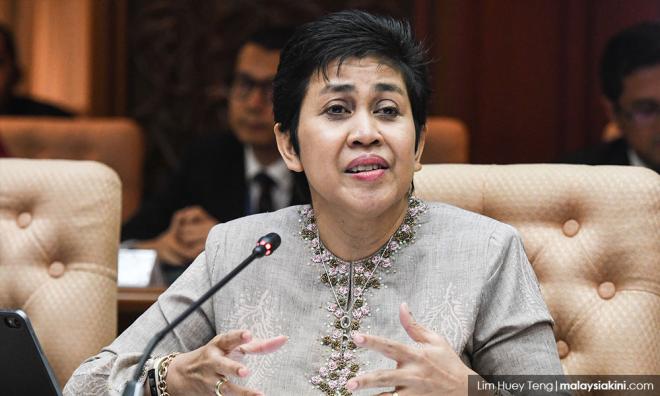 Malaysia's central bank said today there was "ample room" to adjust interest rates after economic growth slowed to the weakest in a decade in the fourth quarter and the coronavirus outbreak threatened to pile on more pressure this year.

"We have ample room, inflation is still low," Bank Negara Malaysia (BNM) Governor Nor Shamsiah Mohd Yunus (photo) told a news conference when asked about the possibility of a rate cut after the growth figures were released.

The central bank unexpectedly cut its overnight policy rate last month by 25 basis points to 2.75 percent, the lowest since March 2011.

Southeast Asia's third-largest economy grew 3.6 percent in October-December from the same period a year earlier, due to lower output of palm oil, crude oil and natural gas, and a fall in exports amid the US-China trade war.

The pace was the weakest since the global financial crisis, well below the 4.2 percent rise forecast by analysts in a Reuters poll, and slower than 4.4 percent in the third quarter.

Full-year growth came in at 4.3 percent, below the government's forecast of 4.7 percent and the weakest since 2016.

The coronavirus epidemic in China will put further pressure on the economy this year, particularly in the first quarter, the central bank said after releasing the data.

The Malaysian government, which has forecast the economy to grow at 4.8 percent this year, is already working on a stimulus package for aviation, retailing and tourism to help cushion the impact.

"The economy is still being supported by very firm private sector spending, and that is a positive development in our economy. More importantly, the private investment might turn around," Nor Shamsiah said.

"But there are downside risks. It's very difficult to predict how long it will take before (the virus) is contained... there are so many moving parts, but we do acknowledge it will impact us in the first quarter."

Malaysia's economy, like many in Asia, came under heavy pressure last year from the escalating Sino-US trade war and softening global demand, with the mining sector particularly hard hit.

While China and the United States agreed to a preliminary deal last month, the fast-spreading epidemic has raised fresh global growth risks and heightened expectations of more stimulus in more vulnerable economies.

Capital Economics expects things to only get worse in the first quarter as tourist arrivals plummet due to virus fears. Tourism accounts for 11.8 percent of Malaysia's GDP, according to BNM.

Potential disruptions to Malaysia's manufacturing sector due to factory shutdowns in China and falling oil prices could also drag on growth.

"While there is clearly a great deal of uncertainty, we are pencilling in a slowdown in GDP growth to just 1.5 percent year-on-year in Q1 - a much bigger hit to the economy than during Sars," Alex Holmes, an Asia economist with Capital Economics, said in a note to clients.

However, analysts say growth could snap back quickly if the virus is contained soon, much as it did after Sars.