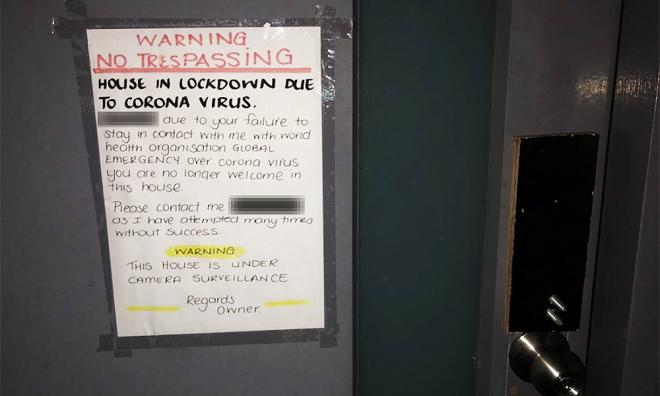 A Malaysian student who returned from Australia to celebrate Chinese New Year got a rude shock when her Perth landlord kicked her out upon her return there because of fears she might be carrying the coronavirus.

According to a report by the Australian Broadcasting Corporation, the unnamed student was bewildered by her landlord's behaviour as she had not been anywhere near China which has seen over 1,300 deaths from the coronavirus outbreak.

Despite the fact she had not travelled to China, the student, who is of Chinese origin, found herself locked out of her apartment - at 4am no less.

She had visited Malaysia on Jan 24 and returned to her rented room in a Perth townhouse in the early morning of Feb 4 only to find the locks were changed.

She was instead greeted by a note saying:

"Warning – No Trespassing", House in lockdown due to coronavirus.

"Due to your failure to stay in contact with me with World Health Organisation Global Emergency over coronavirus you are no longer welcome in this house."

Her belongings were left outside the house for her to collect.

It transpired that the landlord had sent her a number of text messages during her trip but she only received them after returning to Australia.

"You made a decision to travel back home for the Chinese New Year when there was an outbreak of coronavirus.

"The World Health Organisation has declared a global emergency and I now have made a decision to change locks on the house and put your belongings outside as I am concerned for my welfare and family and friends," read one text message to her.

The Malaysian student whose name was not revealed said that she felt sad and confused because she had not been anywhere near China or the city of Wuhan, the epicentre of the outbreak.

She went to the police but they were unable to take any action because she did not have a formal rental agreement with the landlord, whom she was paying on a weekly basis.

She has now moved in with a friend.