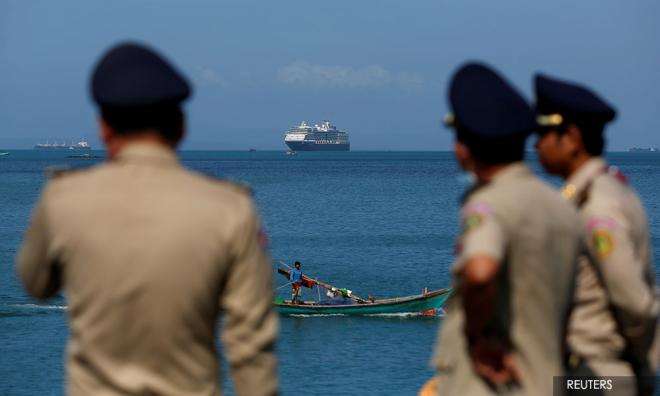 Passengers on a cruise ship that spent two weeks at sea after being turned away by five countries over fears that someone aboard might have the coronavirus cheered and clapped as the vessel finally arrived at a port in Cambodia on Thursday.

The MS Westerdam, carrying 1,455 passengers and 802 crew, docked in Sihanoukville in the evening after anchoring offshore early in the morning to allow Cambodian officials to board the vessel and collect samples from passengers with any signs of ill health or flu-like symptoms.

Prime Minister Hun Sen said on Facebook he would travel to Sihanoukville on Friday to personally welcome the passengers.

"We've had so many near moments we thought we were going home only to be turned away," Angela Jones, an American tourist on board, told Reuters in a text message. "This morning, just seeing land was such a breathtaking moment."

Jones and her fellow passengers have spent almost two weeks at sea as several countries refused to let their ship dock.

The timing of their final journeys home was still uncertain, however, as the ship faces health checks by authorities and passengers need to be taken to Phnom Penh to catch charter flights.

The ship's captain, Vincent Smit, initially told passengers in a letter that some could leave Cambodia as early as Friday,

But in a later announcement, he said there could be delays because of the "number of organisations and authorities" supporting the operation to disembark, as well as the short notice given to Cambodia requesting permission to dock.

Local officials in Sihanoukville told reporters that chartered planes to take people from the port town to Phnom Penh were not ready yet, and the Westerdam had asked to delay disembarkation until Friday.

Passengers have had regular health checks throughout the journey, said Holland America Line, the ship operator and a unit of Miami-based Carnival Corp.

Nobody has fallen ill aboard, but the ship was turned away by Guam, Japan, the Philippines, Taiwan and Thailand over fears that someone on board could have the new flu-like virus.

The disease has killed more than 1,300 people and infected about 60,000 people, with the vast majority of deaths and cases in China.

In a video address shown onboard the Westerdam, Orlando Ashford, the president of Holland America Line, thanked passengers for their understanding in "incredibly unusual and challenging circumstances".

"I'm sure you'll have some good stories to tell when you reach your final destination home," Ashford said in a copy of the video seen by Reuters.

To break up the monotony, the ship's crew organised dozens of activities, passengers told Reuters this week.

The sound of cheering inside the ship could be easily heard from Sihanoukville port when the Westerdam finally docked.

World Health Organisation chief Tedros Adhanom Ghebreyesus praised Cambodia for its example of "international solidarity" that the WHO has been calling for.

Stoking authorities' fears in countries on the ship's route has been the quarantine in Japan of the Diamond Princess cruise ship, also managed by a unit of Carnival Corp. Of the 3,700 passengers and crew on that vessel, 175 have tested positive for the virus.

On Tuesday, the Westerdam tried to dock in Bangkok but was denied permission by Thai authorities.

On Wednesday, a Thai Navy warship escorted it out of the Gulf of Thailand, and it set course for Cambodia, the Marine Traffic website showed.

In a video message posted to Twitter, the US ambassador to Cambodia, Patrick Murphy, said he had sent a team to help US citizens with disembarking and continuing their journeys and was coordinating with embassies of other nations.

Jones was still puzzled how she ended up on a fortnight-long cruise to nowhere.

"Thousands of travellers by air interacting with hundreds of people can land no problem but a cruise ship that made a one-day stop in Hong Kong almost two weeks ago is rejected by so many countries.