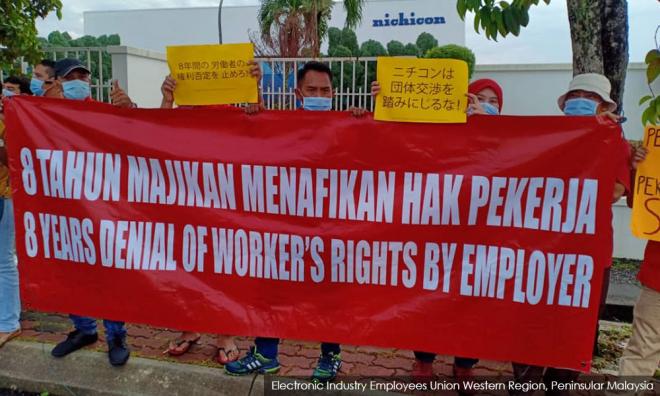 Nichicon is a company specialising in electrolytic capacitors and circuit products which set up shop in Malaysia in April 1990. Its employees' union was granted recognition by then Human Resources Minister Richard Riot on April 17, 2014, nearly 18 months after it began the process in 2012.

According to EIEUWR general secretary Bruno Periera, the union was then bogged down by a number of court cases lasting nearly four years.

"After the company lost the cases, the union sent in its proposal consisting of 58 articles for the first collective agreement on Feb 27, 2019," said Pereria.

"However after eight months of negotiations, we managed to conclude only 34 articles. The process was moving at a snail’s pace because the company rejected some important articles such as the effective date and duration of the agreement, thus rendering the negotiation process meaningless," he added.

Following a breakdown in negotiations, the union called for a peaceful one-hour picket this evening.

Pereira claimed that the negotiation process is still being stonewalled as the union has proposed to re-start the negotiation without any pre-conditions, but that proposal was rejected, leaving union members no choice but to call for the picket.

Malaysiakini is attempting to contact Nichicon for a response.