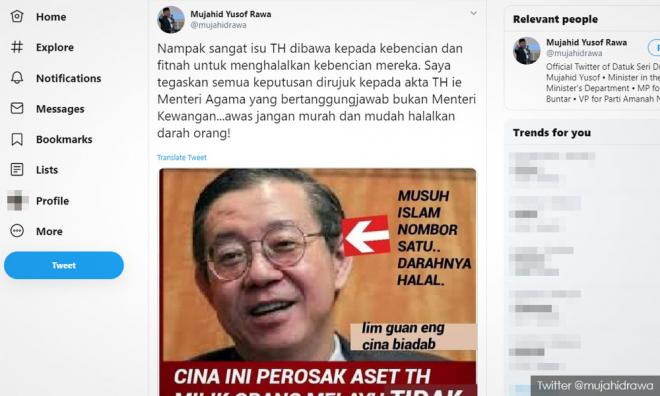 Mujahid Yusof excoriated those who are targeting Finance Minister Lim Guan Eng over the developments related to Tabung Haji.

The minister, who is in charge of Islamic affairs, also shared an image circulating on social media which bore the DAP leader's photograph and described him as the religion's “number one foe, whose blood can be spilled.”

The caption added: “This Chinese is the one damaging TH (Tabung Haji) assets belonging to the Malays. He doesn't deserve to live in Tanah Melayu.”

However, Mujahid pointed out that it is the minister of religious affairs and not the finance minister who is responsible for decisions pertaining to Tabung Haji.

“In the process of rehabilitating Tabung Haji, Lim becomes the target despite all policy decisions made by the Prime Minister's Department (religious affairs) in accordance with the Tabung Haji Act.

“What is their motive? It is clear that this issue (is being used to sow) hatred and slander to legitimise their hatred.

“I wish to stress that all decisions are referred to the Tabung Haji Act. The minister of religious affairs is responsible and not the finance minister,” he added.

Prior to this, Mujahid had shared another fake image claiming that Lim was chairing a meeting on Tabung Haji.

“This is the real reason behind raising this issue.

“They (detractors) are not interested in the efforts to rescue Tabung Haji but want to use it to spread lies and slander to soil Pakatan Harapan's reputation despite (Harapan) saving a RM10 billion deficit due to the previous BN government,” he tweeted.

DAP often finds itself in the crosshairs of Umno and PAS as well as other right-wing groups with regard to religious and racial issues.

Despite its leaders' repeated denials and explanations, the predominantly Chinese political party continues to be accused of harbouring an agenda to dilute the position of Islam and the Malays.

Yesterday, detractors were up in arms when a purported internal notice announcing the closure of four Tabung Haji-owned hotels went viral on social media.

The two-page notice also mentioned about offering a separation scheme to the employees.

However, Tabung Haji and Urusharta Jamaah subsequently issued a statement stating that the hotels would continue to operate and none of their staff would be laid off.

Meanwhile, Mujahid said the four hotels are among 29 assets owned by Tabung Haji which had incurred losses.

"The principle in the recovery of Tabung Haji is to identify assets which incur losses. This is to save (it) from the deficit left by Umno.

"There are 29 of those assets including the four hotels which were made viral.

"(The hotels' ownership) is transferred to the SPV (special purpose vehicle) owned by the government with the original value, to ensure the continuity of TH's operation," he said.