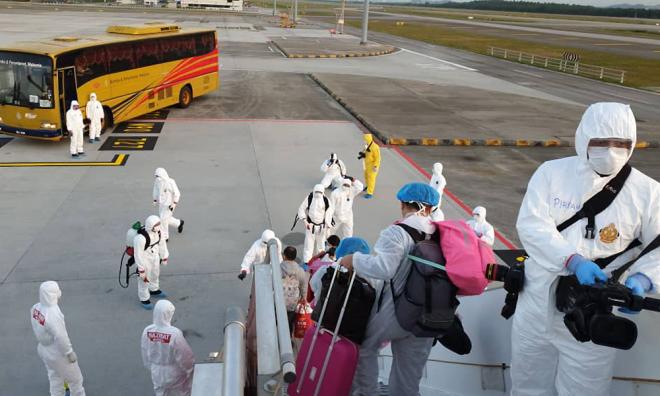 CORONAVIRUS | The second aircraft sent to evacuate Malaysians and their families from Wuhan and surrounding areas in China has safely returned to Malaysia.

AirAsia flight AK8265 landed at KLIA about 6.50am, carrying 66 of the 75 people scheduled to depart Wuhan, the epicentre of the Covid-19 outbreak that has to date killed more than 2,700 people globally - most in mainland China - and with more than 80,000 others affected by the virus.

The National Disaster Management Agency (Nadma) confirmed that nine others were unable to make the flight due to health reasons, one person was unable to get to the airport and another had work commitments.

Of the 66 returned safely to Malaysia this morning, 46 are Malaysians while there rest are their dependents such as spouse or children.

Others on the plane included 12 flight crew, nine Malaysian government representatives and two officers from the Malaysian Embassy in Beijing.

Apart from health screening underwent at the Wuhan Tianhe International Airport, evacuees will also undergo further screenings at the Air Disaster Unit at KLIA and taken to the Higher Education Leadership Academy (Akept) in Nilai, Seremban, for a 14-day quarantine.

No one, including close family members, are permitted to visit those in quarentine.

"Family members or friends are asked to understand the situation and cooperate.

"For safety reasons, the location is being guarded by police," Nadma said in a statement.

It added health checks will be carried out twice a day.

Meanwhile, those found to be infected, if any, would be sent to Hospital Tuanku Ja’afar, also in Seremban.

Malaysia recorded 22 positive Covid-19 cases - six Malaysians, 15 Chinese and one American - of which 20 have since recovered and been discharged.

Yesterday, Nadma confirmed the second evacuation effort would still take place despite the current political upheaval in Malaysia following the collapse of the Pakatan Harapan government, the resignation of the prime minister and the termination of his cabinet.

Mahathir has since been appointed interim prime minister by the Yang di-Pertuan Agong, but he has yet to name any interim ministers.

Follow our live coverage on the developing political situation here.