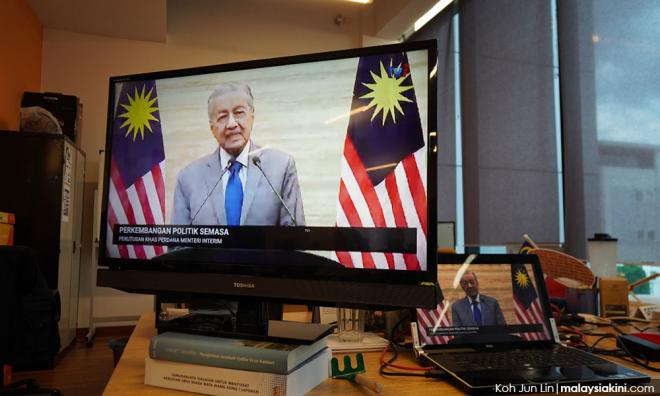 Interim Prime Minister Dr Mahathir Mohamad has broken his silence over the collapse of the Pakatan Harapan government and disclosed his plans for the way forward.

Here is the English translation of his full speech, which was given in Malay:

First of all, let me apologise to all Malaysian citizens as the political condition of the country has been in shambles and may have caused concern about you.

As publicly known, I have delivered my resignation letter as the seventh prime minister to the Yang di-Pertuan Agong.

However, I was later asked to meet with the Agong and after more than an hour of discussion, His Majesty accepted my resignation letter and later appointed me to be the interim prime minister.

There are many reasons why I resigned but it is enough for me to say that I feel as if I have the support from all quarters till I am unable to decide who I should choose.

Other than that, there are also allegations that I have no intention to resign and am power-crazy.

It is for that reason I have resigned because as a politician, the most important thing is what is the ruling party - whether it is the one that lost or won.

Actually I promised that I would resign to give the Dewan Rakyat the chance to decide who will replace me. If it is true that I still have the support, I will return. If not, I will accept whoever is chosen.

The chance to change the leadership remains. Except in my opinion, because I am supported by both sides, the time for me to resign has yet to arrive.

I asked to be given time. But my party Bersatu has decided to leave Pakatan Harapan. There are also members of other component parties who will leave. With this development, the Pakatan Harapan government will dissolve.

The effect of Bersatu supporting PAS and Umno is that parties that have lost will form a government. This government will be dominated by Umno, as it is the biggest party.

I am willing to accept Umno members who left Umno and joined other parties. But if Umno joins this unity government as a party, this I am unable to accept. Therefore I was compelled to resign.

As a normal human being, I am not spared from making mistakes. I apologise if my decision to resign was wrong.

The Agong said that I will be appointed as an interim prime minister. I realise whatever I do now will be objected and rejected by many, but maybe some will support it. I do not seek to be liked by many. I will only do which I think is good for the country.

Politics, politicians, and political parties prioritise politics too much to the point they forget the country is facing economic and health problems that threaten the country.

I believe, right or wrong, politics and political parties must be set aside for now. If I am allowed, I will try to form an administration that doesn't side with any party. Only national interests will be prioritised.

If allowed, this is what I will try,

I pray and ask God that I am guided in this endeavour.