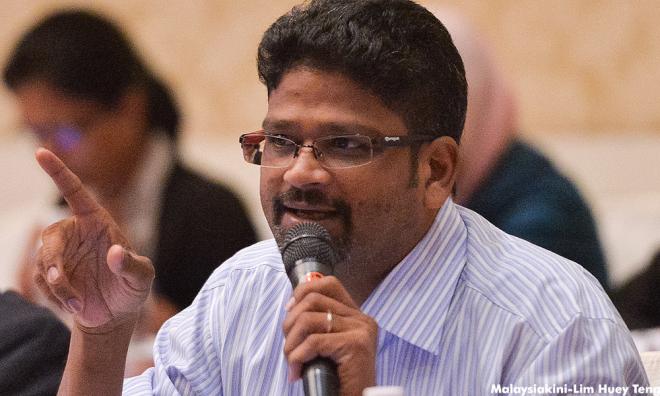 Suaram executive director Sevan Doraisamy (photo) said the charge sheet against Wong suggests his protest against the UM vice-chancellor could provoke the don into a breach of public peace.

Such a claim is absurd and unjustifiable, he said.

“What kind of academic institution would a graduate expect to know when a vice-chancellor could so easily be provoked by a placard and commit an offence as a result of it?” Sevan said in a statement today.

Sevan also aimed public prosecutor Mohd Saphian Zakaria, who urged the Kuala Lumpur Magistrate’s Court to set bail at RM10,000 by claiming that the case is of public interest and the bail would serve as a stern reminder to Wong.

“Both claims are equally absurd. There is no public interest in stifling a peaceful protest nor is the bail system a means to punish an offence or serve as a warning.

“A public prosecutor who has no conception of public interest nor the role of bail in the criminal justice system should not be in any position to conduct any case on behalf of the chambers as their indiscretion would only bring shame to the AGC and cause public harm,” he said.

He urged the AGC to withdraw the case against Wong and ensure there is no repeat of “such absurd prosecution”.

Also calling for the charge to be withdrawn is Amnesty International’s Malaysia chapter.

“This is yet another case of Malaysian citizens being investigated and charged in court for the legitimate exercise of their constitutionally guaranteed right to the freedom of expression,” said the group’s Malaysia interim director, Preethi Bhardwaj, in a statement today.

The interim director urged Malaysia to repeal laws that restrict the freedom of expression and ratify human rights instruments such as the International Covenant on Civil and Political Rights.

Wong, who held a placard during his convocation ceremony last year to protest against UM vice-chancellor Abdul Rahim Hashim’s involvement in the Malay Dignity Congress, was charged under Section 504 of the Penal Code.

He was accused to have intentionally committed a breach of the peace, caused a scandal and angered the UM vice-chancellor and other attendees during the fifth session of the 59th convocation ceremony.

Wong has claimed trial, and the court had set bail at RM3,000 with one surety.