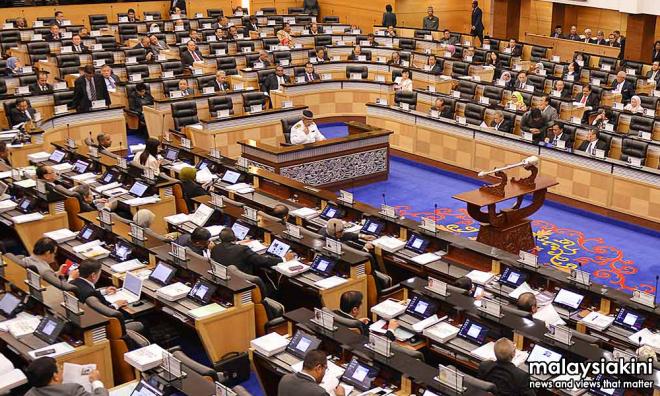 For the first time in Malaysia's history, Parliament will get to decide on who becomes prime minister.

This follows the announcement by interim Prime Minister Dr Mahathir Mohamad today that a special sitting of the Dewan Rakyat will be held on Monday, March 2, for MPs to elect the eighth prime minister to end the political crisis the country is mired in now.

Mahathir resigned as prime minister on Monday and the country plunged into a political crisis following the ruling Pakatan Harapan coalition losing its majority in the Dewan Rakyat as 26 MPs in its component party, Bersatu, and 11 MPs from another component PKR pulled out.

Mahathir also resigned as chairperson of Bersatu the same day.

Also on Monday, the Yang di-Pertuan Agong appointed the 94-year-old statesman to be interim prime minister pending resolution of the situation.

At a press conference in Putrajaya after unveiling the 2020 Economic Stimulus Package to address the economic outlook in the wake of the worldwide Covid-19 outbreak, Mahathir announced that after interviewing all MPs on Tuesday and Wednesday, the Agong found no leader had a distinct majority to be the next prime minister.

Thus, he said, the King was leaving it to the Dewan Rakyat to elect the next PM and if this fails, Parliament is to be dissolved and a snap election called.

At yesterday's press conference, Mahathir also announced that he is back as chairperson of Bersatu.

The latest development gives rise to the question as to how many votes are required for an MP to be the prime minister.

Constitutional expert Associate Prof Dr Shamrahayu Abd Aziz (above) said that even though Article 43 (2)(a) of the Federal Constitution does not specifically state what 'majority' meant, she interpreted it as the candidate who commands the confidence of at least 112 of the 222 MPs in the Dewan Rakyat.

"Some interpret 'majority' as meaning the most ... for example, if there are three candidates, the one who obtains the highest number of votes gets to be prime minister, but to me the candidate must get 112 votes to qualify,”she told Bernama.

Shamrahayu cited the case of Stephen Kalong Ningkan, who was sacked as chief minister of Sarawak, which then saw the court ruling that 21 of the 42 assemblymen in the state assembly losing confidence in him did not constitute a majority.

"So, in line with that, if a vote of no confidence requires more than half of the votes, it is likewise for a vote of confidence,” she said.

Shamrahayu also said a majority vote was logical and important for the stability of the government to be formed because it showed the candidate secured optimum support and qualified to hold the post of prime minister, irrespective of party ideology.

"The voting in Parliament is to find a prime minister who commands the confidence of the majority in the Dewan Rakyat, thus this process is important, it is believed this is the first time Parliament is undertaking such a responsibility.

"I am not sure whether each political party will be nominating a candidate… probably only a few names will be proposed in view of the political crisis now, which centres around certain leaders,” he said.

Nik Ahmad Kamal (above), who is also Head of the Governance, Law and Public Administration Cluster of Majlis Professor Negara, said the process in the Dewan Rakyat for the purpose is subject to its standing orders, and as such, the voting process is bound by the Standing Orders and supervised by the Speaker.

"The voting method might also be different from that as normally done in the Dewan Rakyat because this is unprecedented… it might be by the ballot box method, maybe some other way… it will be up to the Speaker,” he said.

Nik Ahmad Kamal said it was possible there could be MPs who could not attend the special sitting due to unavoidable circumstances, but because of the importance of the process to the country, the party whips must ensure each of their MPs are present to vote.

"What is important is 112 votes, even if 222 MPs do not turn up… nevertheless, a perfect attendance is vital for a special sitting like this as the future of the country is at stake,” he added.