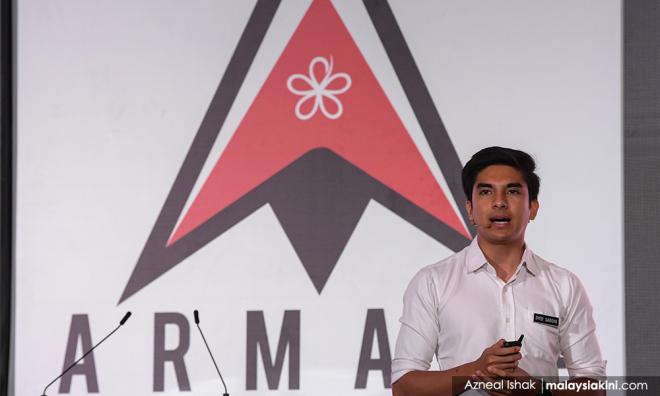 Syed Saddiq rebels against Bersatu: I won't work with the corrupt

Bersatu's Muar MP Syed Saddiq Abdul Rahman has rebelled against his party's attempts to form a new government that will include Umno.

"I became a politician at a time when my country was viewed with disdain by the world and embarrassed by corruption.

"I believed that Malaysians have the right to a better government. One that is free from corruption, respected and with dignity.

"I would like to stress one thing - I will never work with the corrupt. Far from it, I won't form a government with them," Syed Saddiq (photo) said in a video message uploaded on Twitter this morning.

Even though Bersatu has publicly claimed all 36 of its MPs, including new addition from PKR defectors, are now supporting party president Muhyiddin Yassin as the new prime minister, the party is split.

Some MPs are still siding with Bersatu chairperson Dr Mahathir Mohamad who is adamant that the party should not work with Umno, the party which has several leaders facing prosecution for grand corruption.

Syed Saddiq conceded that his position may upset certain parties but indicated that he won't budge.

"This is no longer about party or majority, this is about identity and integrity.

"I understand my position will not sit well with certain politicians but politicians come and go, Malaysians are the true masters of this country," he said.

On Wednesday, Mahathir had indicated that his party may nominate Muhyiddin as prime minister and said unlike him, Muhyiddin was more receptive to working with Umno.

Mahathir had met with Bersatu MPs yesterday morning but walked out after they insisted on involving Umno in the new government with Muhyiddin as prime minister, which was the original plan when the "Sheraton Move" was initiated last Sunday.

Mahathir, who is the Bersatu chairperson, had also blamed his own party for the Harapan government's collapse after Muhyiddin took Bersatu out of Harapan and allied with rogue PKR MPs, BN, PAS, GPS and Warisan in a bid to form a new government.

The efforts were temporarily scuttled by Mahathir but now appears back on track.

Harapan had lobbied for Mahathir to restore the previous Harapan government but Mahathir is insistent on an alternative - a new government that does not follow party lines but failed to gain traction and caused MPs to withdraw support for him.

It is unclear how many of the 36 Bersatu MPs Mahathir can still garner support from.

The split in Bersatu is also evident from the statements issued yesterday.

Bersatu Youth vice-chief Aizad Roslan, in a statement last night, said the wing will continue to support the party's supreme council's decision to back Mahathir as prime minister.

He said the meeting yesterday which declared that Bersatu's 36 MPs will back Muhyiddin as prime minister, cannot represent the party as it was only discussed among MPs and was not endorsed by the entire supreme council line-up.

"Bersatu Youth reiterates that it will not work with individuals plagued by corruption scandals and are facing trial," he said.

Bersatu supreme council member A Kadir Jasin, a Mahathir loyalist, yesterday also claimed that the meeting to declare Muhyiddin the prime ministerial candidate was not endorsed by the party's supreme council.

Similar splits could be observed at the state level where, in Johor, with Muhyiddin's blessing, Bersatu, BN and PAS have taken over the government with Johor Umno chief Hasni Mohammad as the new menteri besar.

In contrast, Bersatu deputy president Mukhriz Mahathir, who is also Mahathir's son, has maintained Bersatu's cooperation with Harapan in the Kedah government. Mukhriz is the Kedah menteri besar.