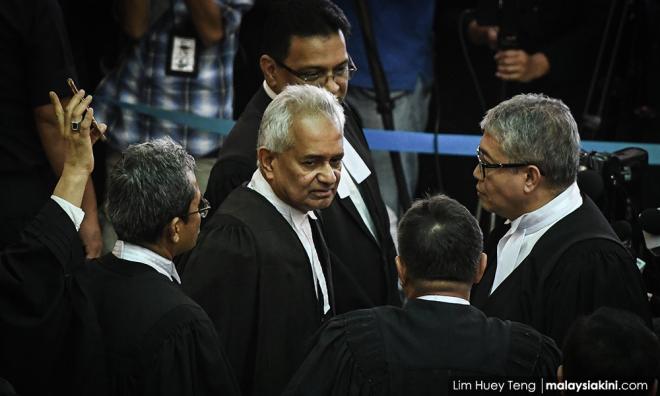 Yoursay: Tommy Thomas should have stayed till the very end

YOURSAY | ‘Others may fill your post, sir, but none can fill your shoes.’

Vijay 47: Tommy Thomas, sir, it is exceedingly unfair of me to say this, but I did not expect you to resign.

Nobody would know or understand the terrible attacks and sabotage you must have been subjected to on a daily basis from the moment you were appointed attorney-general (AG).

Malay-Muslim fanatics were baying for your blood from day one. To them, it was unthinkable that a non-Malay, a Christian at that, could have been given that position of immense responsibility. The deep state, especially in your own chambers, has been working overtime around the clock. We wonder which other friends were your enemies.

There is even speculation that you were appointed for that very reason, to create a schism within Pakatan Harapan so that when Dr Mahathir Mohamad finally played his cards as he has now done, support for him from the extremists would have been that much greater.

How true the Abdul Hadi Awang and Zakir Naik credo rings, that a non-Malay, however honest and honourable he may be, should never be allowed to assume a position reserved exclusively for a Malay whatever a scoundrel and degenerate he may be.

Again, I regret my unfairness and selfishness though not at all my sympathy and compassion, but I strongly believe that you should not have resigned. You have served your office with great integrity, you have been a true subject to His Majesty, and if this was unpalatable to the howling hounds, it was to their shame.

You should have stayed on, despite the savage conditions and the inevitability, and persevered until Mahathir or any of his servants dismissed you. Yes, this is grossly unfair to ask of you but in resigning you have removed an additional curse that the prime minister would have earned.

You laid charges once thought impossible, including the countless ones against Najib Abdul Razak though we now wonder whether that was not another item of subterfuge devised by the master of evil. You brought the Liberation Tigers of Tamil Eelam (LTTE) cases to the only conclusion they merited. Sir, on every count, you are truly a worthy son of the nation.

In the end, you can always proudly say that you kept the faith, you fought the good fight but it was destined you would never have been allowed to finish the course. Others may fill your post, sir, but none can fill your shoes. God continues to bless you, Tommy Thomas.

Annonnymous 080: Why should Thomas resign? One would be led to assume that he believes that he can’t do any more or worse still, he was asked to do the impossible.

Here is why he should have stayed on nevertheless:

1) Now that the post is vacant, we could have lawyers like Haniff Khatri Abdulla appointed or even worse still, many unqualified people who claim otherwise about their abilities.

2) The country will start losing its US cases such as Goldman Sachs and other recoveries as there are only a handful of lawyers capable of deciphering the complex issues, extraterritorial legislation and the complicated legal process in the US to institute proceedings, seek trial, put witnesses on the stand and cross-examination.

So, is Mahathir, the Malay rulers and rakyat willing to sacrifice such a big recovery matter, an amount which can build 20 hospitals? Don’t be surprised if suddenly the new AG agrees to a settlement as he has no mental acumen to deal with this matter and be seen as a hero.

3) The deep state in the Attorney-General’s Chambers will soon take over and strange things will happen. Unprosecutable cases will be prosecuted, old files will be opened.

What a pity. Malaysia, oh Malaysia!

Toffee: Let there be hope. Hope is all we have and in hope, we shall continue with our daily lives. We must have faith that truth will triumph at the end of the day, no matter how long it takes.

Thomas should have completed his tenure at least, there is no reason for him to have submitted his resignation, and the only reason I can see is due to Mahathir himself. Being a man of integrity, he probably felt that he could not serve the interests of a liar and we all know who he is.

Anonymous_1543386425: Thomas had done his best under very trying circumstances although he was unable to complete the major cases.

I am not sure whether his resignation would affect the status of the outside prosecutors appointed by him which would be an issue likely to be raised by defence lawyers.

One of his memorable acts would be to drop all charges against the LTTE 12. Tommy Thomas leaves with a clear conscience. Thank you very much and God bless!

Justice4altantuya: This is a regression from Malaysia Baru to Malaysian Official 1's version of Malaysia - kleptocrats swimming in corruption and blood of the innocents.

Just when we pulled ourselves out of the shadow of the 1MDB scandal into a beacon of democracy and peace on May 9, 2018, we are going to be the laughing stock of the world once Najib and his cohorts slither back into Putrajaya hand-in-hand with their new PAS and Bersatu buddies.

The blood, sweat and tears of the legal fraternity in the battle to bring Najib and his cohorts to justice must not be wasted. For the sake of the rakyat and especially those who lost their lives - Altantuya Shaariibuu, Kevin Morais, Teoh Beng Hock, Ahmad Sarbani Mohamed, and many more - justice must prevail and those responsible must face the music.

One person can still prevent Malaysia from sliding back into our dark age of kleptocrats and he is the Agong. But the decision for parties to submit their choice for the prime minister’s post ought to be calling for snap polls instead.

The rakyat do not want these backdoor politicians who manipulate and compromise our Rukunegara philosophy of "kedaulatan undang-undang" (rule of law). As loyal subjects, we have faith and trust in our Agong that he will be fair to his subjects and let us choose via snap elections.

Justice must prevail and the guilty ones put in jail.

Clever Voter: Is resignation of the attorney-general an indication of what we can expect in the next one week?

Strong and impartial institutions are necessary building blocks towards a better-governed nation. Perhaps this is a sign of what would happen with the return of a crooked government, a red flag which the Agong has to seriously take note of.

Anonymous 770241447347646: Thomas knows what is going to happen if Bersatu president Muhyiddin Yassin is chosen as the next prime minister.

All of the current corruption cases will end up finding all of those charged not guilty. He does not want any part of it. Decent leaders who have dignity are hard to find.

Thank you, Thomas, for your sincere service to the nation.

TehTarik: What Mahathir is trying to engineer is a coup by right-wing Malay groups. As demanded earlier by these groups, there is no place for non-Malays in senior government positions or government-linked corporations (GLCs).

It is good that Thomas resigned. Next should be Tony Pua and Ong Kian Ming at the Finance Ministry. There will be zero appreciation of the input from them.

In fact, they are often the target of scapegoating and anger by the right-wing groups. They have put in hours beyond their call of duty and for the good of the nation. Instead of appreciation and gratitude, they were cursed and disparaged by these groups.

For the sake of peace and stability in the nation, and not to anger these right-wing Malay groups, all non-Malays who head government departments, public universities and GLCs should consider resignation. Thomas is showing the way.

We should apologise for endorsing Dr M, not be an apologist for him
29 Feb 2020
Yoursay: Muhyiddin’s triumph and the return of the kleptocrats
29 Feb 2020
Anwar counts on disgruntled MPs from 'other side' to give Harapan the numbers
28 Feb 2020
Mahathir says he has the numbers, Harapan backs him in bid to thwart Muhyiddin
29 Feb 2020