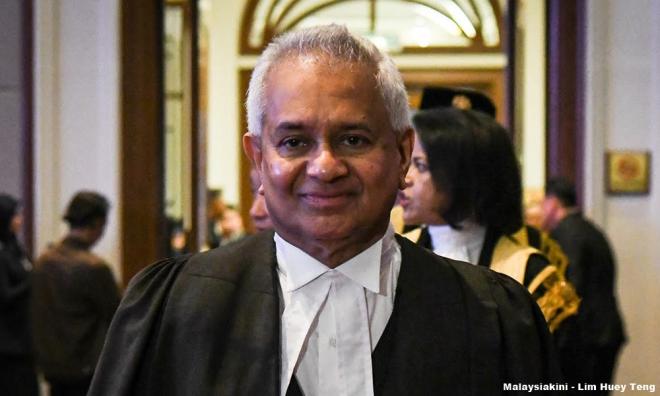 COMMENT | It has come as no surprise to me that Tommy Thomas resigned as the attorney-general yesterday. This, I am sure, was in anticipation of a change in regime he could not possibly work with for reasons too obvious to mention.

Tommy was the first practising barrister to be appointed directly from the Malaysian Bar to the position of attorney-general. He was also the first non-Malay non-Muslim Malaysian to have held this position since the formation of Malaysia in 1963. This in itself speaks volumes, especially when his appointment was made by a Malay Muslim ruler on the recommendation of a Malay Muslim prime minister.

Despite vehement protestations at his appointment, hurled unflatteringly by certain misguided segments of society totally unfamiliar with the concepts of meritocracy and basic hard work, Tommy persevered with his duty to ensure the rule of law was adhered to and that those who had broken it were called to account.

I have known Tommy for many years as a fellow member of the Bar and a comrade in arms in much futile litigation brought in the interests of the common man against the mischievous antics of the previous delinquent government.

Tommy had previously been a fearless member of the Bar Council who fought to ensure the principles of good governance were maintained and that the guarantees enshrined in our Constitution were strictly adhered to and not manipulated to suit current political expediency.

Tommy didn’t have to accept the position as attorney-general. He had a lucrative law practice and was involved in varied and high-powered litigation. He was a much sought-after senior counsel able to command the fees he wanted. The salary of the attorney-general is less than moderate in comparison. There are no legal means available to supplement this salary.

Tommy understood the sacrifice he would be making by taking up this position. He knew he would never be able to appear in court again. This was the end of the line, so to speak, as far as his career was concerned. Yet he felt this was something he had to do for the good of the country he was born and brought up in and which he loved and wanted to protect.

When news emerged that Bersatu president Muhyiddin Yassin was to be sworn in as the next prime minister, Tommy did what was right. He relinquished his position for the simple reason he knew he would never be able to work under the dictates of a regime he had dedicated 18 months of his life to bringing to book. Make no mistake. Tommy wanted the Umno crooks prosecuted and placed behind bars. No compromise.

'Do what is right'

Of course, the Umno crooks were a little disheartened by this perseverance and were prepared to do anything to extricate themselves from the quagmire they were firmly entrenched in. Hence the initial and unholy alliance with PAS was followed by the instigation of an Azmin Ali coup, which unfortunately set off the rapid disintegration of the Pakatan Harapan coalition.

This would not have happened if more of our lawmakers had been brought up and sufficiently educated to respect the basic concepts of honour, dignity and self-respect, let alone being able to appreciate the difference between right and wrong.

But all is not lost. The East Malaysian lawmakers appear to be still in a state of flux unable to read the situation with clarity and unable to make their respective decisions appropriately.

The message to them is very simple. Do you want to see all the good that has been done by our inimitable AG unravelled because the crooks are back in power or would you prefer that we return to civilisation? The ball is in your court. You are now the kingmakers. Use your power for the well-being of our beloved nation.

Do what is right and honour the trust the people invested in you and the rest of the Harapan coalition when they voted you in – to get this country back on track and to end the miserable years of grand larceny at the expense of the nation, perpetrated by a bunch of unrepentant and unaccountable thieves.

Help the nation rid itself of these vermin. Tommy sacrificed so much to get this done. All you have to do is recognise this and support his efforts. After all, this is what the law is all about, and you are all Law Makers, not Law Breakers.

AMERICK SIDHU is a senior lawyer.

Yoursay: Tommy Thomas should have stayed till the very end
29 Feb 2020
We should apologise for endorsing Dr M, not be an apologist for him
29 Feb 2020
Yoursay: Muhyiddin’s triumph and the return of the kleptocrats
29 Feb 2020
Tommy Thomas resigns as AG
28 Feb 2020