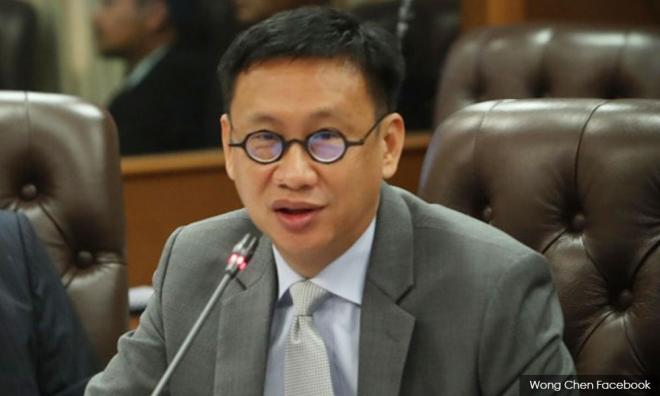 Wong Chen self-quarantines, says two MPs exposed to Covid-19 were in many meetings

CORONAVIRUS | Subang MP Wong Chen this morning announced that he was imposing a self-quarantine.

This follows Malaysiakini's report that a former minister and deputy minister were in close contact with a confirmed Covid-19 patient.

He acknowledged that both the former minister and deputy minister, who are MPs, were in several political meetings during a week-long political crisis that ensued after the Pakatan Harapan government collapsed last Monday.

"Tests are being conducted on the former minister and former deputy minister. They attended many political meetings during the week-long crisis.

"Given the above, the responsible thing is for me to self-quarantine for today and tomorrow, until we get the test results of the former minister and former deputy minister," he said in a Facebook post.

Wong Chen (photo) said there was no need for panic and precaution is being taken to contain any possible spread of the virus.

"Those who have come in direct contact with a Covid-19 victim should practice self-quarantine discipline, and, if sickly, to contact the hospital for tests. I am perfectly fine this morning.

"I will be working from home and will engage my officers via conference call," he said.

Yesterday, Malaysiakini reported that the duo, one from Perikatan Nasional and another from Harapan, had come in close contact with a patient in the 26th case of Covid-19 in the country.

Patient 26 is a senior member of the Khazanah leadership and the head of a government-linked company.

He had attended a government function at a hotel in Kuala Lumpur on Feb 27, together with the former minister and deputy minister, who are also MPs.

According to the Health Ministry, patient 26 had travelled to Shanghai in the middle of January.

He developed a fever and sore throat on Feb 27, the same day of the event, and was tested positive for Covid-19 on Feb 29.

He has been admitted to the Sungai Buloh Hospital isolation ward.