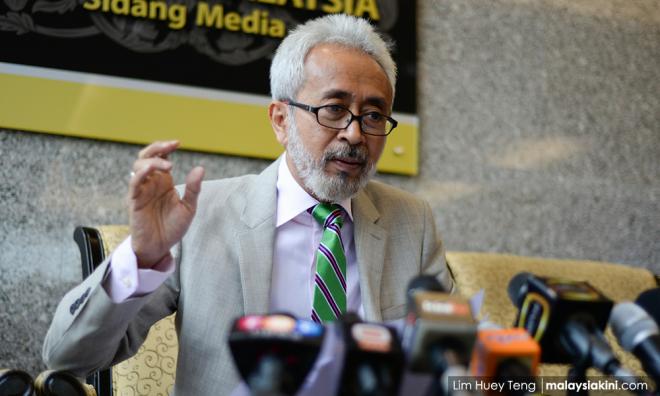 An Amanah leader has taken a swipe at PAS president Abdul Hadi Awang's insistence that the Islamist party did not form a backdoor government through the Perikatan Nasional pact.

Contrary to Hadi's claim that PAS had gone in through new front doors which opened after Pakatan Harapan's downfall, former deputy minister Raja Kamarul Bahrin Shah Raja Ahmad (photo) insisted that the parties in power today had sneaked into the homes of the rakyat without their knowledge.

"PAS, that claims to be an Islamist party, had committed the same betrayal against the Perak PAS government when Umno-BN took over the state without an election.

"Today, what PAS used to say was forbidden, they are doing it together with a partner that stole Perak (from PAS)," said the Terengganu Amanah leader in a statement.

"PAS used to say they wanted to guide Umno to follow the Islamic way, it now looks like Umno is the one teaching PAS how to form a backdoor government.

"Umno is leading and PAS is following them today," he said.

He added that Amanah, as a loyal component of Harapan, welcomes support from all factions who are frustrated with crossovers by politicians who are only seeking power.

Abdul Hadi, in an opinion piece yesterday, had justified PAS' latest cooperation with Umno, Bersatu and others in Perikatan Nasional, in the name of upholding a Muslim leadership.

He also argued that PAS in its history had pursued various forms of cooperation and there were many different "doors in democracy" to reach Parliament or the state assembly.

Several Harapan leaders, including Amanah communications director Khalid Samad, had accused Muhyiddin of misleading the Yang di-Pertuan Agong in the actual number of support received from MPs to form the new government.

Harapan critics, including from within the new Perikatan Nasional pact, had, however, insinuated that any objections to Muhyiddin's appointment is tantamount to questioning the Agong's decision.