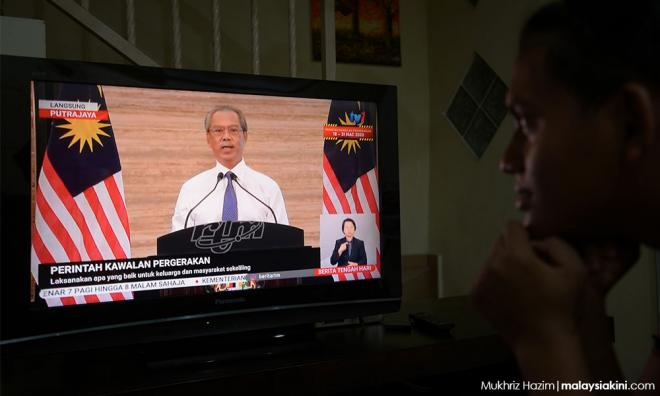 1. Prime Minister Muhyiddin Yassin said the movement control order would be extended by two weeks until April 14, and promised that more economic stimulus packages would be announced on Friday.

3. Ten laboratories under the Science and Technology Ministry and the Higher Education Ministry will help the Health Ministry perform up to 1,414 tests a day on the coronavirus.

4. The Health Ministry said it expects the number of Covid-19 cases to reach over 6,000 by mid-April, but is working to reduce that number. As many as 172 new cases have been reported, while the death toll has risen to 20.

5. The police have arrested 107 people for disobeying the movement control order since it came into force and some of them have been charged in court.

6. Muhyiddin has urged charity organisations and zakat collection centres to rise to the occasion and help those affected by the Covid-19 outbreak. De facto Religious Affairs Minister Zulkifli Mohamad Al-Bakri reiterated that Islamic Affairs Department’s Musa’adah Covid-19 fund is not only for Muslim recipients.

7. The Myanmar Ethnic Rohingya Human Rights Organisation Malaysia (Merhrom) said it has received hundreds of requests for help from Rohingya community in Malaysia, and its resources are stretched thin in trying to meet those needs.

8. Electoral watchdog Bersih has urged for constituency development funds to be formalised as federal and opposition governments withheld allocations for opposition representatives.

9. Cameron Highlands farmers have dumped hundreds of tonnes of vegetables due to labour shortages, closed markets and other supply chain problems.

10. The US has lifted a ban on Malaysian glove manufacturer WRP Asia Pacific Sdn Bhd that was imposed over allegations of using forced labour to cope with a shortage, but the industry itself is short of cartons to ship its gloves.