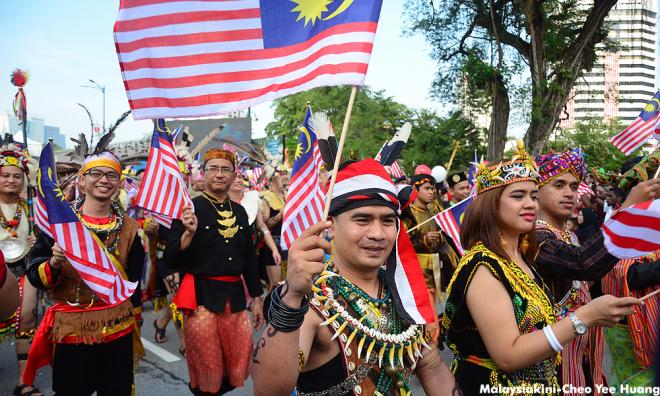 Are we collectively a sum greater than all our disparate parts?

COMMENT | We are all Malaysians. Malays, Chinese, Indians, Dayaks, Kadazans, Bidayu, Melanau, Bajau, Eurasians, Orang Asli et cetera. We speak 137 languages. We are Muslims, Buddhists, Christians, Sikhs, Bahais et cetera. Some of us are in Sabah and Sarawak and the rest of us live in Peninsula Malaysia.

Unfortunately, over the years we have become a divided society. Divided mainly as a result of our politics.

When the Pakatan Harapan government came into power, the hope and expectations were that government policies would be more inclusive and financial assistance would be needs-based as opposed to being race-based. Unfortunately, the opposition ratcheted up race and religious issues and mounted a vicious campaign to destabilise the government.

In the end, they succeeded. They succeeded because of an attempt on the part of the then prime minister to establish a unity government. He resigned as prime minister opening the door for a new coalition to emerge comprising BN, PAS and members of Bersatu and PKR.

Harapan MPs stood around shocked, confused and uncertain about what they should be doing. Theirs was the shortest government in our history.

So now we have a new government headed by Prime Minister Muhyiddin Yassin who was the home affairs minister in the Harapan government.

And we have the coronavirus pandemic. The virus rages throughout our society. It is not concerned about what our race or religion is.

The government has instituted a partial lockdown to slow down the spread of the virus. The army and the police patrol our streets to ensure people observe the rules of the movement control order (MCO).

If this was war against an external enemy there would be a call to arms. All Malaysians would come together in a collective effort to defend the nation. As they did during World War II, the Communist Insurgency and during Confrontation.

The coronavirus is an invisible army. It has penetrated our society. This is a war. There should be a call for all Malaysians to come together in a common effort to defeat this deadly virus.

The prime minister in his speech announcing the RM250 billion stimulus plan acknowledged the fact that his is not the government people voted for.

He nevertheless declared that he would be prime minister for all Malaysians.

The first test of that inclusiveness is going to be the stimulus package. Is it fair, just and equitable in its distribution to all Malaysians whatever their race or religion?

And it must look after businesses that are forced to shut down during this period or see a virtual cessation of their business because of the pandemic. We must support them because they employ many workers and because we will need viable businesses when this crisis is over to lift us up and move us forward.

Does the plan achieve these objectives?

There are fears and anxiety that financial assistance and food distribution will not reach everyone in need. Even before the crisis, we were informed that many children in urban areas were malnourished subsisting on one meal a day. We were told that our poverty rate was more than 15 percent. With the MCO and the closure of many businesses, many jobs will be lost and many workers will not earn any money. Will all receive food and financial assistance?

People of all faiths and charities like the Rotary, Lions, Kiwanis have looked after the very poor including the elderly, orphans, the infirm and the handicapped for decades. But there is the suggestion now that they should simply leave their donations or contributions at government centres. The reason given is to limit the risk of virus transmission.

That is unacceptable. These organisations have their missions. They should be allowed to do their work provided they follow stipulated precautions.

Parliament should be convened, and the stimulus plan debated. This will ensure that it is scrutinised by all MPs. The plan must be acceptable to all parties. In the US both Republicans and Democrats agreed to their US$2 trillion (RM8.6 trillion) stimulus plan.

There are many questions that need to be asked and answered. Where will the money come from? Is the aid to the poor adequate? Are the right businesses being supported? Who determines the viability of businesses to be supported? What criteria are to be adopted to determine who gets support? Are banks and other financial institutions playing their part?

And what happens after April 14? How long can we sustain the MCO? Does the state of the pandemic determine when the MCO is lifted or the amount of money we can assemble? What timelines does this stimulus package assume?

These are not easy questions to answer. It would seem sensible therefore to convene Parliament and debate the issue. The leader of the Opposition should give the assurance that a motion of no confidence will not be tabled during this session of Parliament for all to focus their energy and attention to helping the nation deal with the pandemic.

DAVID DASS is a lawyer, a Malaysiakini subscriber and commentator.