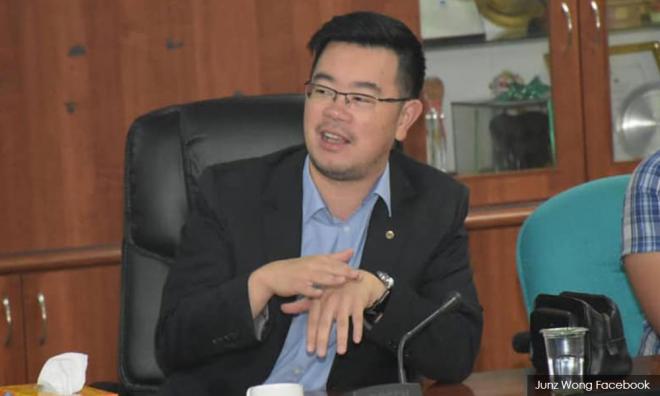 CORONAVIRUS | Sabah wants Putrajaya to grant the state greater autonomy to manage its food stockpiles during this Covid-19 pandemic.

Online news portal Free Malaysia Today quoted Sabah Agriculture and Food Industry Minister Junz Wong (above) as saying that the state faced delays in obtaining “essentials” due to these being held up in Peninsular Malaysia.

“In times of crisis like this, Putrajaya needs to delegate to Sabah as we can better manage ourselves. I have relayed this to the federal Agriculture and Food Industries Minister Ronald Kiandee and he will consider it.

“I see a need for Sabah to manage its own stockpiles of essentials like rice, fertilisers and animal feed, especially during the movement control order period.

“These essentials are vital to ensure continuous production of vegetables and meat supplies,” Wong said after having conducted a teleconference with Kiandee in Kota Kinabalu today.

“In districts like Tawau, Lahad Datu, Kinabatangan, Keningau, Ranau, Tuaran, Putatan, Tenom and Kota Marudu, the pasar tani function as a centre for produce to be sold by farmers and purchased by consumers,” he said.

He also said that both he and Kiandee agreed that traditional fishermen should be allowed to resume their work.

Wong added that Kiandee would confer with the National Security Council (NSC) to allow the fishermen to fish during the MCO period.

The online news portal quoted the council’s deputy chairperson Robert Lau’s dismissal of the allegation that some families only received one or two trays of eggs while others were given mere five eggs, during food-distribution to the residents on Monday.

“The items were donated by a Good Samaritan who has many employees staying at the flats there. It was decided to give (the food) to each household instead of screening to see who needs it most.

“It was also decided that there should be no delay in distributing the food as many of them have been without work for two weeks, so the distribution was done in Sibu Jaya instead of routing it through Sibu resident’s office and this was agreed to by the office,” he said.

Lau said that the 20 flat blocks each have sent a representative to collect the items on behalf of their respective residents.

He rubbished claims that the event was politically-driven, emphasising a representative of Sarawak Dayak National Union (SDNU) Sibu Jaya had asked him to give a speech on behalf of the donor, as the latter did not wish to speak.

“During the short speech, there were no words about politics, much less about Gabungan Parti Sarawak (GPS). This had nothing to do with GPS or political parties. It was not an SRDC event or initiative,” he said.

Lau said that representatives from the district office and Welfare Department also spoke during the event to thank the sponsor as well as to inform flat residents that the government would be assisting them later.

On the purported uneven distribution of eggs, he said some did not receive any as only half the donated amount was supplied.

“I am not sure when the supplier can deliver or how it is to be distributed later. But that is not the point. The point is in these trying times, when there are groups of people who need help – any help is very much appreciated.

“I sincerely thank the Good Samaritan for acting immediately and sponsoring the rations,” Lau said, and called on those seeking help to contact the district office and the Welfare Department.