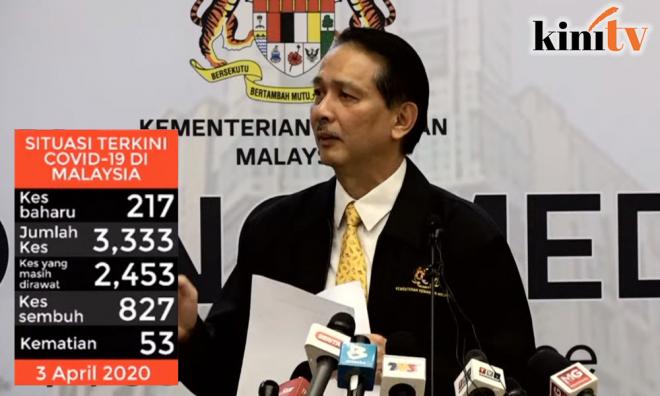 CORONAVIRUS | There are 217 new cases of Covid-19 in the country as of noon today, bringing the total number of cases to 3,333.

This is the second straight day that more than 200 new cases were reported. It is also the second-highest daily increase in new cases. Previously, the highest increase was 235 on March 26.

There have also been three new deaths, bringing the death toll to 53.

Of the new cases, 58 are from the Sri Petaling gathering cluster.

Forty-four others have been admitted to the UKM Hospital, including 41 cases linked to a tahfiz in Selangor.

Meanwhile, 138 health ministry workers have been infected with Covid-19.

Of these health workers, 58 were infected after attending weddings for individuals who were part of the Sri Petaling cluster.

Fourteen other health worker cases were related to patients with severe acute respiratory infections who did not know about their status or who did not inform the health workers of their condition.

Two healthcare workers were also been infected after attending the Sri Petaling gathering in late February.

Around 3,000 others have yet to be screened.

Of the current patients, 108 are in ICU, three more than yesterday.

Of the 108, 54 are on ventilators, the same number as yesterday.

On the bright side, 60 people have been cured and were discharged today.

The three new deaths are as follows:

An 84-year-old Malaysian woman who had a history of heart illness. She was treated at the Sungai Buloh Hospital on March 12 and was later transferred to the National Heart Insititute. She died at 1.07pm yesterday.

A 52-year-old Malaysian man. He was treated at the Tuanku Jaafar Hospital, Negeri Sembilan on March 18 and died at 7.55am today.

A 73-year-old Malaysian man who had a history of diabetes, hypertension, and heart and kidney diseases. He was treated at the Raja Permaisuri Bainun Hospital, Perak on March 24. He died at 9.30am today.

Asked on the delay in reporting some deaths, Noor Hisham said that this was due to some private hospitals reporting the deaths late.