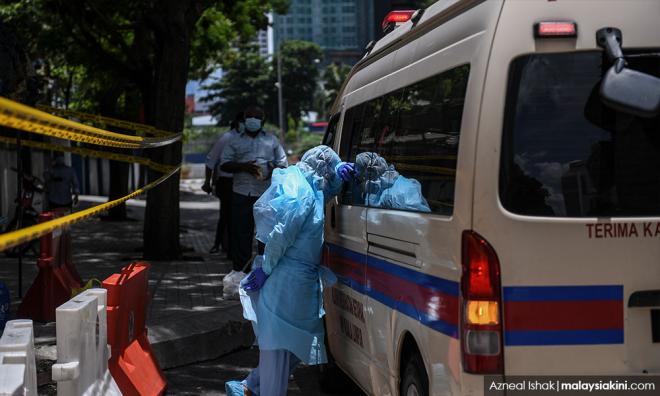 CORONAVIRUS | There are 150 new cases of Covid-19 as of noon today, bringing the total number of cases to 3,483 said Health director-general Dr Noor Hisham Abdullah.

There are also four new deaths, bringing the death toll to 57.

Of the new cases, 80 are linked to the Sri Petaling mosque gathering in late February.

Noor Hisham said the Sri Petaling cluster is the biggest in Malaysia, with 1,545 cases in total, which is 44.63 percent of total cases.

Of the current Covid-19 patients, 99 are currently in ICU, nine less than yesterday.

Of the 99 patients, 50 are on ventilators, four less than yesterday.

On the bright side, 88 people have been cured today, bringing the total to 915.

This means that more than a quarter, or 26.27 percent, of Covid-19 patients have recovered.

The four new deaths are as follows:

An 85-year-old Malaysian woman with a history of heart disease. She was treated at the National Heart Institute on March 23 and died on March 28.

Noor Hisham explained that there had been a delay in the reporting of her death to the ministry.

A 66-year-old Malaysian woman with a history of hypertension. She was treated at the Sultan Ismail Petra Hospital, Kelantan on March 18. She died at 4pm yesterday.

A 56-year-old Malaysian man with a history of heart disease. He was a close contact to Patient 1,031. He was treated at the Sarawak General Hospital on March 30. He died at 4.16pm yesterday.

A 61-year-old Malaysian man with a history of diabetes. He was treated at the Tengku Ampuan Afzan Hospital on March 23. He died at 10.25pm yesterday.

There were three new cases in Bandar Baru Ibrahim Majid in Simpang Renggam, Kluang meaning there are now 100 cases in the township. The total number of cases in Kluang is now 135.

The Menara City One condominium in Kuala Lumpur also has one new case with 18 in total. Meanwhile, the number of cases in Sungai Lui, Selangor remains at 90.