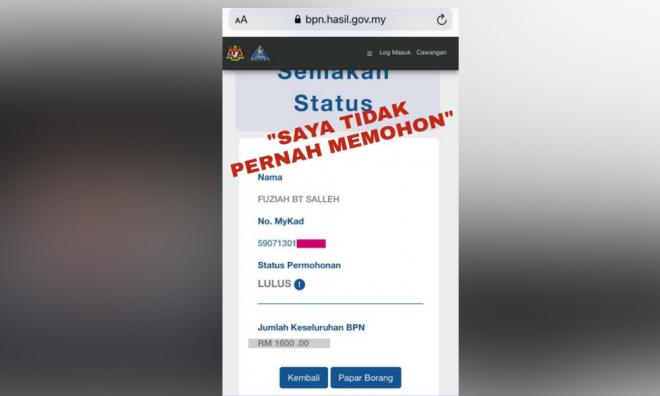 YOURSAY | So who’s at fault here - IRB or the taxpayer?

More MPs found to be 'eligible' for BPN aid

Jag: If it is true as mentioned that the Bantuan Prihatin Nasional (BPN) payouts are showing discrepancies and is not as intended by Prime Minister Muhyiddin Yassin, then it is only fair that the whole exercise is put on hold, a thorough investigation is done and corrective action is taken before the payouts are made.

Also, both the PM and Finance Minister Tengku Zafrul Tengku Abdul Aziz must come forward to provide an explanation on the cause of it and actions taken. Please note all these payouts are taxpayers’ money.

Kural: This could be sadly and improperly misconstrued as distributional inequities under the leadership of Muhyiddin.

Obviously, this inefficient situation should be immediately investigated to effectively correct a technical if not a systemic failure leading to such cases of gifts of monies under a stimulus package specially conceived to mitigate the suffering of the needy.

On the other hand, it’s a hilarious situation for an environment with a notorious past reputation for diverting public funds to personal coffers.

Hopefully, other ineligible recipients will follow the good example of Kuantan MP and former deputy minister Fuziah Salleh and declare themselves.

Dompet Saya: It borders on total and utter embarrassment that our government don’t have one set of income data on its citizens.

The eTunai list was the best attempt yet as the National Registration Department (NRD) details were cross-checked with Inland Revenue Board’s (IRB) data. However, after all the hard work, the current Finance Ministry has abandoned this system.

They can trace within minutes who posted what in which social media but can’t correctly identify who earns what in Malaysia.

The IRB should have a record of all Malaysian citizens and residents, whether they pay income tax or not. Then this sort of fiasco won’t happen.

Bluemountains: The backdoor government probably prioritised politics over the economy of the country.

Perhaps, in their eagerness to transfer money into the hands of the masses, they have overlooked the readiness of a foolproof system to ensure money is given only to those that truly qualify for it.

Such hastiness has caused unnecessary wastage which will ultimately be borne by the taxpayers. The aftermath of Covid-19 may see the government imposing more taxes to recoup the money spent. It may also resort to more borrowings and cause the ringgit to depreciate further.

Higher taxes and a depreciating ringgit will certainly bring more hardship to the people.

Weijian: I worked in Singapore and declared zero income to the IRB. I’m Chinese and I received a notice that I will get the maximum RM1,600 aid. I didn’t apply for it.

Hence, I believe our tax status determines the type of aid you get. Those MPs who get something means they declared less than RM4,000 (single) or RM8,000 (household) income per month.

RengitBP: Thanks Weijian for sharing. We jumped very quickly to the conclusion that it is racial.

The above is based on what’s published in various websites. There has been no publication on whether those incomes are taxable and how much a senior minister makes. While there are questions on the completeness of the system, there is a bigger question on the accuracy/veracity of tax filing done by our MPs.

I also learnt that for non-Malays, when they found out that they are eligible, they probably keep quiet. While the Malays will voice out if they think they are ineligible but the system says they are. This gives a perception that only Malays got it, even undeservingly.

Thank you, Weijian, for sharing that you are also eligible. It helps to demonstrate that it is simply a flawed system rather than a system driven by a racial divide.

I think the BPN aid has significant flaws in its approach to identify eligible people for the scheme. It uses mostly data from the IRB on income tax declared in 2019 to determine eligibility as that was the last income tax data available to the authorities. As such, there will be:

1. Those who paid more than RM8,000 per month in 2018 but lost their jobs in 2019 who would miss out on the BPN payment. There must be a way to allow these group of people to apply for BPN post-movement control order (MCO), with the appropriate documentation.

2. Those who earned less than RM8,000 per month in 2018 but have earned more than that since then. They could be eligible for BPN.

3. There are business owners who would declare low salaries from companies that they own but have higher actual earnings due to a majority of expenses being tagged as cost of doing business and additional income through dividends (dividends are not taxed at the individual level), they may be found eligible in the system for BPN.

4. Those who under-declare their income could also be eligible for BPN. In the case of Pokok Sena parliamentarian Mahfuz Omar and Fuziah, we have to ask how did they file their income tax in 2019 when they earn RM16,000 and RM24,880 per month respectively.

The government should consider sharpening the accuracy of its selection by taking data from the Employee Provident Fund (EFP) and Social Security Organisation (Socso).

Legit: The government system is screwed up. Until now nobody knows how the IRB works because if you question them, you could be marked and blacklisted. The BPN handout has exposed the weakness in the IRB system and god knows what other flaws exist there.

IRB, please halt the BPN payments immediately and overhaul the system to see what the problems are first.

Anonymous_1548240224: The first priority in this current crisis is for the money to be distributed to the people as quickly as possible. The IRB has no choice but to use the data which they already have in their system.

The income data in the IRB records is based on the data supplied by taxpayers. So who is at fault here - IRB or the taxpayer filling in their income?

PW Cheng: If we look at it positively, the Covid-19 pandemic has exposed various weaknesses in the government machinery.

I had also mentioned a few other issues regarding foreign workers and maids. I hope the government will take note and start collecting and collating all these weaknesses for improvements later.