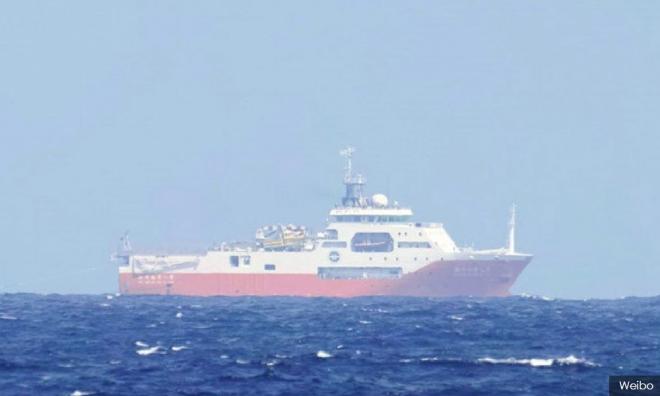 A Chinese government survey ship embroiled in a standoff with Vietnamese vessels moved south near Malaysia, shipping data showed Thursday, amid accusations that China is using the pandemic to assert its presence in the South China Sea.

The Haiyang Dizhi 8 was spotted off Vietnam this week, returning after being closely tracked last year in the resource-rich waters, a potential global flashpoint as the United States challenges China's sweeping maritime claims.

The ship appeared to have started a survey in waters 352km off the coasts of Brunei and Malaysia on Thursday, according to data from Marine Traffic, a website that tracks shipping.

That appeared to be just north of Malaysia's exclusive economic zone (EEZ), near waters claimed by both Vietnam and Malaysia.

A Malaysian coastguard vessel, the KM Pekan, is shadowing the Chinese ship, a Malaysian maritime source said, declining to be identified because of the sensitivity of the matter.

The Haiyang Dizhi 8 had been flanked by as many as seven Chinese coastguard vessels that have since moved away, two sources familiar with the matter said. The Malaysian navy was monitoring the situation, one of the sources said.

The foreign ministries of Malaysia, Brunei and China did not respond to requests for comment.

On Wednesday, a Chinese foreign ministry spokesman had said the ship was conducting normal activities and accused US officials of using the South China Sea issue to smear Beijing.

The presence of the Haiyang Dizhi 8 in the South China Sea comes amid movement curbs imposed by Southeast Asian countries to slow the spread of the coronavirus.

The US State Department had urged Beijing to focus on combating the pandemic and "stop exploiting the distraction or vulnerability of other states to expand its unlawful claims in the South China Sea."

China's U-shaped "nine-dash line" on its maps marks a vast expanse of the waters that it claims, including large expanses in the south that are also claimed by Malaysia, Vietnam and Brunei.