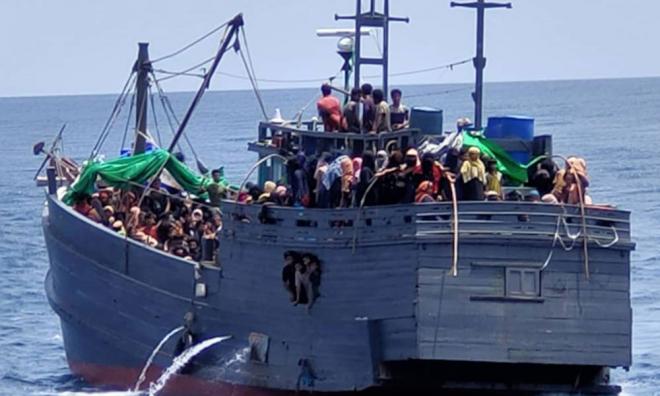 The Malaysian Maritime Enforcement Agency (MMEA) has detained two Myanmar nationals believed to be involved in the smuggling of illegal immigrants, including Rohingyas, into the country.

Kedah and Perlis MMEA deputy operations director Maritime Captain Zulinda Ramly said the men were arrested in an operation following information obtained from a group of 202 Rohingya arrested in Langkawi waters for illegally entering the country on April 5.

She said the first arrest, a 36-year-old man, was made at a house in Simpang Empat on April 16 while the second suspect, a 31-year-old, was detained at an unnumbered house in Guar Chempedak, Yan, two days later.

"Initial investigations showed that the first suspect was the brother-in-law of the main mastermind behind all the human trafficking activities into the country.

"The search conducted in the first suspect's house led to a payments logbook to the agents, which led to the arrest of the second suspect," Zulinda said at a press conference in Alor Star yesterday.

Zulinda said MMEA was currently tracking the main suspect, who is believed to have arranged the entry of the illegal immigrants via the country’s waters, particularly off Kedah, Penang and Johor.

"Each immigrant has to pay RM1,500 to the agent and their modus operandi was to ferry them using large boats while in Myanmar’s waters before switching to smaller boats once they have crossed our waters,” she said.