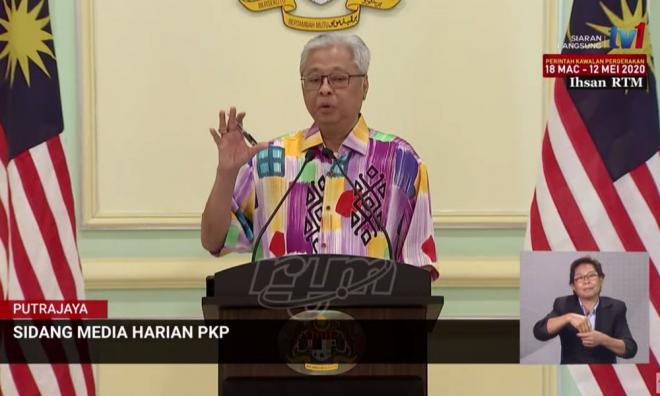 Minister: No inter-state travel from May 1 to 3

Senior Minister (security cluster) Ismail Sabri Yaakob clarified that people are not allowed to cross state borders between May 1 and 3.

Ismail said from May 1 onwards, the police, National Security Council (NSC) and the Health Ministry will study all applications for inter-state travel.

He stressed that even after the study, only limited travel might be permitted.

"It is not going to be straightforward," warned Ismail (photo), during his daily press briefing today.

Among others, the authorities will have to study whether the intended destination and departure points between different coloured zones are allowed.

The authorities will also have to study when such travel will be allowed to take place.

Those who wish to travel have until May 1 to put in an application through the Gerak Malaysia smartphone application or the nearest police station.

Putrajaya was considering allowing inter-state travel, especially for those who are trapped in small towns or villages but have their residence in the cities.

Earlier today, there appeared to be some miscommunication between the police and the NSC.

The police had issued a statement claiming that the inter-state travel period was between May 1 and 3 and that the Gerak Malaysia application would be used as a form of "travel permit".

The police had also said people from different states would travel on different days.

Meanwhile, Ismail said tertiary institution students who are unable to return to their homes in "red zones" will be given the option to seek shelter with their relatives.

"They can stay (for instance) with at their home of their siblings," he said.

From tomorrow onwards, the government will be bussing students home located in "green zones".

Putrajaya will allow these students to return as long as they have been sheltering in hostels for more than a month.