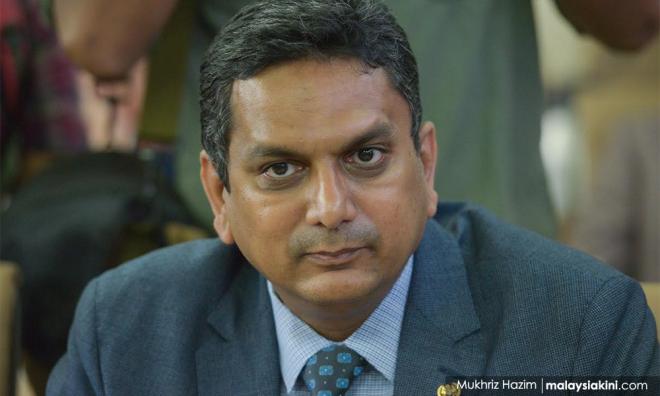 COMMENT | Edmund Santhara, the deputy federal territories minister, has been in the news a bit lately but for all the wrong reasons.

Five days ago, he implicated the mostly Chinese DAP and its base for fermenting anti-Rohingya xenophobia.

Checkmate Santhara. He has shown a Donald Trumpian tendency for recklessness when casting blame without proof, and taking liberties with facts to shore up his relevance in a regime struggling to win broad-based legitimacy despite the public health crisis.

Against the background of incurably barefaced racism, greed and corruption embedded in the Malaysian psyche, Santhara nevertheless turned to opportunism on the Rohingya issue.

Santiago may have scuppered Santhara’s populist cheap shot but you wouldn’t know it: he raced off to chase his next rainbow.

This time he pimped the idea that the Selayang wet market's closure, as a result of the enhanced control movement order, was a godsend. It has rendered foreign workers jobless but – voila! – turns out it’s a boon for unemployed locals.

“It’s a myth that without foreigners, wholesale markets cannot operate,” Santhara enthused. If that’s a myth, his next claim bears the seal of a hoax.

He said the wet-market traders, who were paying foreign workers around RM55 a day, are now paying locals RM100 per day. It beggars belief.

Which Malaysian employer willingly lifts his daily wage bill by RM45 without at least a grizzle and, what’s more, in a recession? And where’s the evidence?

It gets better. “It’s all about economics,” Santhara exuded next. Already the wet-market is trading at 65 percent capacity despite the enhanced movement control order (MCO).

Bankrupt Malaysia Airlines would be envious. Perhaps Mydin Mohamed will now flag 100 percent capacity for his retail outlets since the May 4th economic re-opening. Loose tongues have a way of wagging fanciful assertions.

Traders reminded Santhara that locals once just weren’t interested in working at the wet-market because they weren’t offered pension-fund contributions and social security (Socso).

To any layman, this suggests the traders are now offering these entitlements to local workers. Why not before? Ripping off locals with latitude, perhaps, as they would have foreign workers.

So why are locals now happy to work at the wet-market? Santhara will retell the economic imperative. What he won’t say is the economics of grinding poverty.

Malaysians, particularly the low-paid and the jobless, are despairing about their future. Covid-19 has destroyed jobs. It might be a long haul out of economic gloom.

That alone speaks volumes on successive regimes’ basis to labour market policy for contrived competitive advantage. So much, then, for the Malaysian free-market.

Since the early 1980s “economics” also underscored Malaysian employers’ demand for foreign workers over locals. Foreigners, legal or illegal – some six million of them today – were infinitely cheaper than locals.

Business profits boomed before firms turned to exploit human misery to rake in even more money. Locals, meanwhile, continued to shun jobs they felt were beneath their world-class academic qualifications and transferable skill-sets.

Traders also told Santhara a modernised and clean wet-market would attract more locals to work there. Great idea on the cleanliness bit; the rest is spin.

Here’s the rub: one, nobody yet knows what the unemployment rate will be in Malaysia. There’s more economic fallout to come.

Last Tuesday, Bank Negara Malaysia dropped its overnight policy rate (OPR) rate to two percent from 2.5 percent, as expected; the lowest in 10 years. It spells trouble ahead. Worse if deflation sets in.

Two, with the jobless peak still to come, a modernised wet-market will need only half the "normal" 3,000-strong workforce.

Modernising the wet-market titillates Santhara, a businessman himself with RM132 million in wealth assets.

But a modernised wet-market will dump more Malaysians onto the jobless scrapheap to face ever-dwindling employment prospects and incomes.

This won’t help ramp up aggregate demand to get the economy out of recession any time soon. And nobody – not the Economic Planning Unit, the Economic Action Council, Bank Negara, Malaysia’s top economics guru, nor Azmin Ali – knows just how deep this recession could become.

World commodity prices including oil and export markets have shrivelled up. Economies, governments and businesses are drowning in debt.

World economic growth will be at least three percent for 2020 if we’re lucky. And a forecast 5.8 to 6 percent rebound in 2021 by the likes of Fitch Rating agency and the International Monetary Fund is fantasy.

Thing is: can the Malaysian economy afford not to have these lowly-paid foreign workers? Even the Federation of Malaysian Manufacturers would admit its members’ addiction to cheap foreigners who are critical for lowering their marginal cost while locals still demand higher wages, salaries and air-conditioned workplaces.

Business Malaysia is equally paltry. It has refused to pay to test their foreign workforce for Covid-19. They want taxpayers to foot the RM1 billion bill.

Azmin Ali should hound the Malaysian Employers Federation the way he’s been harassing states defying his order to reopen their economies – an order made all the more laughable following his blunders and legal threat, from which he has tried to walk back.

Edmund Santhara mustn’t be let off the hook. He needs to deal with the millions of foreign workers now unemployed and stranded in Malaysia.

After tactlessly flying at the DAP with untested accusations, he has to take responsibility. Though he’s more likely to fob it off to the human resources and home affairs ministries.

That said – and in a throwback to British colonial days – Santhara seems keen to ship the Rohingya people to the peninsula hinterland as indentured plantation labour in the regime’s out-of-sight-out-of-mind move that undoubtedly will placate legions of jingoists.

Maybe Santhara is on to something here. Then again, maybe not.

MANJIT BHATIA reads economics and international politics in New Hampshire in the US.