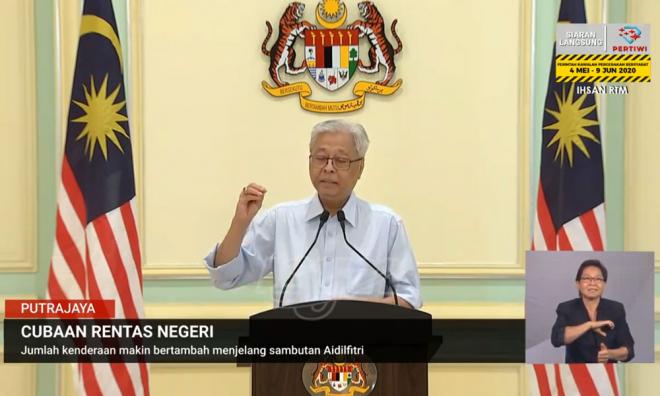 CORONAVIRUS | The police and armed forces will go on patrols during the Hari Raya Aidilfitri celebrations to ensure the conditional movement control order (MCO) standard operating procedures are being followed.

Defence Minister Ismail Sabri Yaakob (photo), during his daily press conference in Putrajaya, today said this was to ensure those celebrating Hari Raya adhere to social distancing measures and comply with the ban on interstate travel set by the government.

Interstate travel is disallowed during the order period, except for those who have obtained prior police permission.

“Many people assume that on Hari Raya the police will not monitor their homes. True, not every house will be inspected.

“But I was informed by the (inspector-general of police) that during the festive season, police will patrol all areas. If they find many cars parked out front, they will investigate to determine how many people are in the house.

“So I remind you, the police and military have agreed to patrol on the first day of Raya and subsequent days,” the senior minister said.

Previously, the government stated visits during Hari Raya, Hari Gawai and Hari Kaamatan will only be permitted on the first day of the celebrations.

Visits would be limited to just family members and are to be capped at a maximum of 20 people for the entire day.

Meanwhile, Ismail revealed that a total of 1,633 vehicles had attempted to travel interstate yesterday.

"The police told them to make a U-turn instead," he said.

Ismail said more vehicles will attempt to cross states as Hari Raya approaches and warned that the police would take stern action by issuing compounds.

"So far, the police are still considerate not to issue compounds and other actions.

"I believe that eventually, they will take stern action," he said.

On compound issuance, Ismail said the police had started issuing compounds where 15 individuals received the fine yesterday for breaching the MCO.

"I already said that the ministers' special meeting had given the power to the police to take action, and this (the latest update) means compounds have already been issued," he said.

Former Covid-19 patients advised not to receive Raya visitors
19 May 2020
Ismail: NSC survey found majority will not welcome guests during Hari Raya
18 May 2020
Minister: More than 500 cars in 'balik kampung' attempt turned back
16 May 2020
Curfew at home, no visiting, tell kids don’t come back - Health DG’s Raya advice
15 May 2020