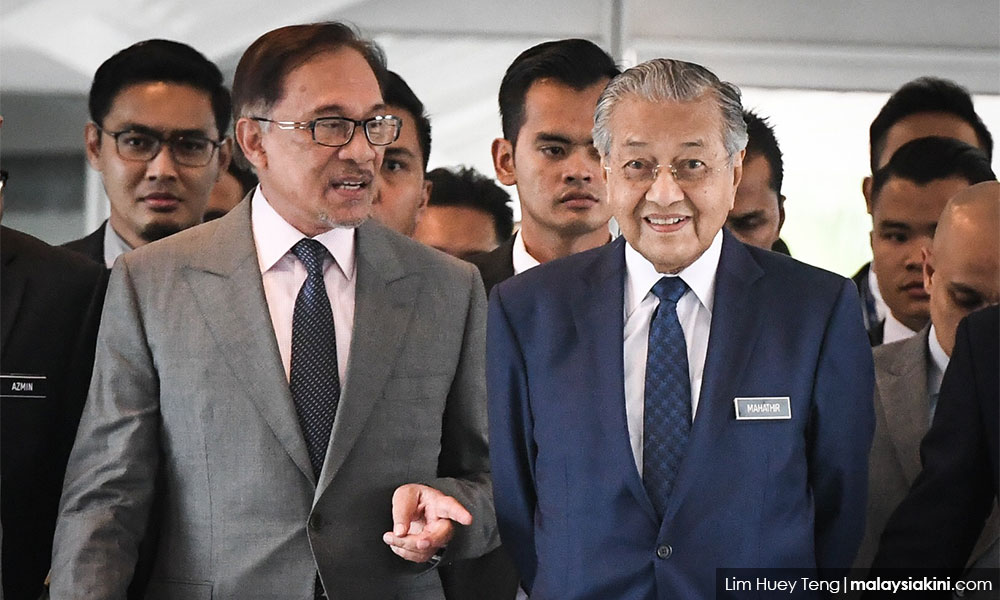 YOURSAY | ‘If they cannot decide, then wait for GE15. What's the hurry?’

'Harapan++' thinks it's on the cusp, but Dr M vs Anwar still a sticking point

Kim Quek: Former prime minister Dr Mahathir Mohamad was such a total disaster as leader of the Pakatan Harapan coalition government that it would be insane to choose him to lead Harapan again.

If some DAP leaders still fancy Mahathir to PKR leader Anwar Ibrahim as PM as reported here, and if these leaders dare to air their preference publicly, I guarantee that they will be buried politically for good.

If they don’t have the numbers to form a government right now without Mahathir, so be it. It is not a life or death issue that they must do so at this instant. They can always mount another challenge when the opportunity arises.

Their principles are of paramount importance and their pledges to the electorate are sacrosanct. They cannot and should not sacrifice any of these.

I firmly believe that if they are steadfast to their reform ideals and remain united, they will succeed. History has shown, time and again, that “good will triumph over evil.”

P Ramlee: I think Mahathir commands the respect from both sides of the aisle so he should lead the new team again. One DAP MP said it well in this article:

"Refusing to form a government just because of Mahathir is tantamount to legitimising Muhyiddin's government. Anwar will be committing political suicide if he regards Mahathir as an enemy bigger than Muhyiddin and Azmin Ali."

Quigonbond: Who is the DAP source? It doesn't sound like DAP at all. DAP supports Anwar officially. That hasn't changed.

Yes, Perikatan Nasional (PN) will win - and maybe later, Muafakat Nasional will win too - if Harapan don't unite. So the decision lies more with Mahathir than Anwar. Mahathir has to make up his mind. Hate Anwar more or hate Najib Razak/Muhyiddin Yassin more?

He and his supporters including Warisan should throw their support behind Anwar. That will demonstrate real statesmanship.

Unspin: If Anwar and his extremely impatient supporters do not look at the big picture, this is what is going to happen: Mahathir will cobble together a unity government comprising Bersatu (minus Muhyiddin and traitors), DAP, Amanah, Warisan, GPS and a few decent MPs from Umno.

Anwar (PKR) will be in opposition together with Muhyiddin and gang, Azmin and gang (how ironic), Najib, Ahmad Zahid Hamidi and gang, PAS, MCA and MIC.

Between the devil (Mahathir) and the deep blue sea (Anwar and PKR), it is probably wiser to choose the devil because we know who he is.

On the other hand, we do not know how deep the deep blue sea is - meaning we do not know whether there will be a second or third wave of betrayals coming from that party.

Anonymous_1537050742: Anwar is right not to give way to Mahathir if PH++ materialises. We need a paradigm shift here. What is wrong for Mahathir to support Anwar as PM9? Why must it be Anwar again to be the one who has to make another self-sacrifice?

Anwar had sacrificed himself to support Mahathir as PM7. If Mahathir is genuinely sincere and wanted to save the country from the band of robbers and looters from Umno, Mahathir should give full support to let Anwar be PM9.

After all, he is already 95 and had his chances twice but each time, he screwed up big time. Mahathir should think at this stage, who is the one going to cause greater damage to the country - PN with Najib and Zahid or Anwar.

To all the supporters and voters of GE14, the choice is clear. So please, Amanah and DAP, take note. You have been warned.

Proarte: Do we see mention of “values, principle, people's mandate, justice, good governance” in their horse-trading? This tells me, Muhyiddin is likely to stay on as PM because opposition MPs are unprincipled and can easily be bought - and Najib, Zahid and Umno have the money to buy their support.

For goodness sake, what on earth are Amanah and DAP MPs talking about when they say Anwar “failed them” during the Sheraton Move? They are talking like potential turncoats themselves. Anwar would easily have had the 'numbers', if Mahathir had the named the date of the transition of power to Anwar as mandated by the rakyat.

MPs from BN and even from DAP, PKR and Amanah are self-serving and will turn if the price and reward is right - this is the reason Anwar was not able to get the numbers at the last minute. If they lie to him, whose fault is it?

If Anwar was not willing to offer bribes, positions and government-linked company (GLC) posts, whose fault is it if he could not get the numbers in the end? To say that is the reason for supporting the conspirator-in-chief Mahathir instead of Anwar is totally illogical, if not downright batty.

Mahathir caused so much instability in Harapan when he was the 'seat-warmer' PM for Anwar. He kept being coy about the handover, fuelling suspicions of conspiracy and puffing up the conspirators who had his support.

It is clear now that Mahathir planned the demise of the Harapan government. Remember his treacherous words "I don’t like Anwar, I don’t like DAP" and the meeting at his own house involving Umno, Bersatu, Azmin and PAS just before the Sheraton Move?

From Mahathir’s point of view, it was only a matter of timing. He wanted to dictate terms but the co-conspirators whom he nurtured, betrayed him and collaborated with the kleptocratic enemies of the people to form the current illegitimate government.

Harapan cannot hope to convince the rakyat that they are a better alternative if they are unprincipled and duplicitous themselves. My enemy's enemy is my friend is an immoral modus operandi and cannot bring about a new paradigm which we were promised in the last election.

Mahathirism destroyed the rakyat's mandate and caused the collapse of Harapan. To hang on to Mahathir's coattails again, says a lot about some of the PKR, DAP and Amanah MPs. They are simply not fit to represent the people and should not be fielded as candidates at the next election.

Anonymous_1532341776: In case Harapan is still thinking of bringing back Mahathir as PM then Anwar and the Harapan leadership must publicly and openly carve out a proper plan and timetable for Anwar to take over.

That is the promise Harapan made to majority Malaysians in GE14 for reformation and corruption-free Malaysia. Mahathir abused this promise many times. If Harapan cannot achieve this goal, then better wait for GE15.

Fredtan: Yes, if they cannot decide, then wait for GE15. What's the hurry?

Or is it the case that DAP and Amanah, having a taste of power and money that came along, that they want to regain the throne at all cost regardless of principles?

By GE15, Mahathir will out of picture automatically, if he is still able at 97.

Shovelnose: How many chances should one be given in life to be top dog? Let others have a go and support from the side as a kingmaker, that's more statesmanlike.

As we had Najib as PM before, we cannot possibly go any lower. So be magnanimous and work together so that the thieves stay away.

Headhunter: Harapan should try to entice Party Sarawak Bersatu headed by former state finance minister Wong Soon Koh to join their pack. With senior members from former PKR now in their rank, I can predict that they will be a force to be reckoned with in the coming state election.

In the days ahead, many PKR divisional leaders are going to join them. Sarawak PKR has lost its direction and the party is split into different camps. The new leaders are recycled politicians who have no vision for the state.

Also forget about GPS. Sarawakians are tired of the same old faces who have been robbing them blind for decades. It may not be ideal but we should make the best of the situation that we are stuck in.

BagusCurryPuff: Meanwhile, the remaining 32 million tired, scared, confused but generally decent people of this country try their best to struggle on.

Many have lost jobs, businesses, livelihoods and face an uncertain future. All are united by the fact that they are totally powerless to have any say or influence on the outcome of any of this.

What broken down, sham of a democracy allows this state of affairs to exist?

The leaders of our divided factions claim they want to save the nation. Sadly, it seems that before any saving can take place, they need to first of all to line the pockets of their supporters with gold.

Elected representatives from every party at both local and national level should lower their heads in shame at this dismal state of affairs they have collectively created.

yoursay
mahathir mohamad
anwar ibrahim
perikatan nasional
pakatan harapan
Related Reports
COMMENT | Why did Muhyiddin expel Mahathir from Bersatu?
a month ago
Change of gov't an opportunity to rebuild economy from scratch - expert
a month ago
COMMENT | Bersatu, Berdua, Berkosong?
a month ago
YOURSAY | Dr M vs Muhyiddin - it's open season in Bersatu
a month ago

Advertisement
01
Anwar confident Harapan will now refocus on struggle instead of PM candidate
4 Jul 2020
02
BN retains Chini by a landslide
4 Jul 2020
03
Two years after resigning, Nurul says will help PKR but no politicking for her
4 Jul 2020
04
Exodus in Ampang PKR as members follow Zuraida to PN
4 Jul 2020