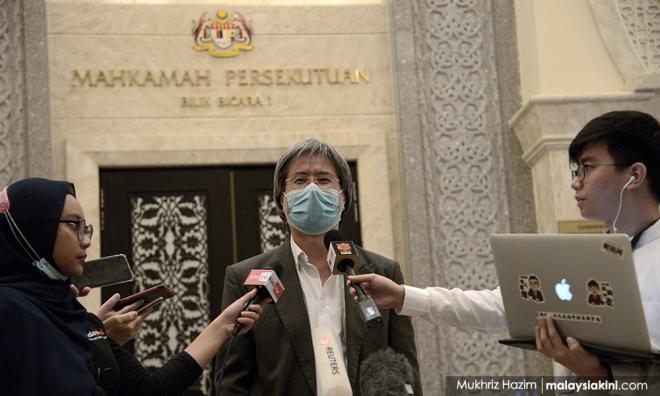 LIVE | The Federal Court hears the contempt proceedings against Malaysiakini at the Palace of Justice in Putrajaya today.

Malaysiakini brings you live coverage of the proceedings at the Palace of Justice.

12.40pm - Thank you for following our live report today.

12.32pm - The Federal Court has reserved judgment on the attorney-general's contempt bid against Malaysiakini and its editor-in-chief Steven Gan.

She informs parties that the court will inform them later of the date of the decision.

11.57am - Proceedings resume after a short break.

Providing facility alone is not enough, there must be actual intention - lawyer

11.05am - Actual intention to publish alleged contemptuous comments must be proven to invite contempt, a lawyer submits.

"It must be intentional publication, there must be an intention to publish scandalous material.

He notes that if the mere facility is all it needs to cite one for contempt, then the court would be kept busy with cases involving many companies for alleged contempt.

Malik says that this would then have a chilling effect in terms of the exercise of freedom of speech under Article 10 of the Federal Constitution, among others.

'Steven Gan not involved in intentional publication of comments'

10.50am - Malaysiakini editor-in-chief Steven Gan is not involved in any way with the intentional publication of alleged contemptuous comments under an online article, lawyer Malik Imtiaz Sarwar submits.

The lawyer argues that Gan is merely the online news portal's editor-in-chief and has no hand in the comments uploaded by the users.

Malik adds that the affidavits filed in court also show that.

"His misfortune is merely being the editor-in-chief, why pick on him?" Malik submits.

Judge says intention must be proven

10.39am - A member of the seven-person bench tells the government counsel that they have to prove intention in contempt of court case.

Federal Court judge Mohd Zawawi Salleh says this when senior federal counsel S Narkunavathy submits to the court that intention was supposedly not necessary in case of publication.

"We are saying that intention is not necessary for publication. They provided the platform, they allowed it (to be published)," says Narkunavathy.

Zawawi: There must be. You must prove beyond a reasonable doubt they have the intention.

Another member of the panel, Federal Court judge P Nallini then adds in, citing a recent contempt of court case against lawyer Arun Kasi.

She says that in the case, the intention to publish was clear.

This is then agreed by Narkunavathy.

'Is negligence to moderate comments enough to amount to contempt?'

10.35am - One of the seven judges asks the government counsel whether negligence on the part of Malaysiakini in moderating comments on its website amounts to contempt of court.

Abdul Rahman: Negligence... But does that amount to contempt? Because they did not put in place proper (measures), therefore you are saying they are negligent?

Abdul Rahman: But is that enough to amount to contempt?

Another member of the panel, P Nallini then adds on, saying that negligence does not amount to contempt of court.

10.15am - Malik Imtiaz Sarwar, the lead counsel representing Malaysiakini and its editor-in-chief Steven Gan, raises his objection against an attempt by senior federal counsel S Narkunavathy to introduce new evidence that goes out of their statement on the case.

This comes as the senior federal counsel attempts to bring in an argument about how non-subscribers could view and share comments posted on its website.

"This is highly prejudicial to my clients," he tells the court.

Narkunavathy then informs the court that she withdraws the argument.

10.10am - Government lawyer S Narkunavathy seeks to call an expert to cross-examine over a system being used by Malaysiakini to filter comments on its news portal.

To put in context, the application was made to cross-examine an expert witness who provided a report on the system. The report was included in the respondents' affidavit-in-reply.

According to the Narkunavathy, they want to find out whether Malaysiakini could have added more words to its system which are in use to filter foul words from being uploaded by commenters.

"It won’t pick up all 2,000 comments but might pick up a certain percentage where the comments administrator can look and decide whether these should remain or should be removed," she says, referring to Malaysiakini's affidavit saying that the portal receives over 2,000 comments daily on its website.

She also tells the court that the expert's report did not address how the comments administrator works.

"We don't know from this report who is the person tasked to do this, or is it done regularly or not."

9.55am - Senior federal counsel S Narkunavathy, who appears on behalf of the attorney-general, tells the Federal Court that there is no requirement in law for them to demonstrate that Malaysiakini had the intention to publish the comments that were contemptuous towards the judiciary.

Citing Section 114A of the Evidence Act, the government lawyer also claims that Malaysiakini has facilitated the publication of the comments, and thus presumed to have published them.

"We say there is no requirement in law for the applicant to demonstrate that the respondent intentionally published the comments," says Narkunavathy.

9.40am - Seven judges who will be presiding the contempt hearing against Malaysiakini enters the Federal Court courtroom.

Proceedings begin before the bench chaired by Court of Appeal President Rohana Yusuf.

8.45am - The Federal Court today hears the contempt proceedings against Malaysiakini at the Palace of Justice in Putrajaya.

Among the possible outcomes of today’s apex court proceedings are that the independent news portal is slapped with a fine, or its editor-in-chief Steven Gan jailed.

Legal representatives acting for applicant Attorney-General Idrus Harun, and the respondents, namely Malaysiakini and Gan, will submit before the apex court on whether to allow or dismiss the contempt bid.

On July 2, a seven-member bench of the apex court dismissed Malaysiakini's application, filed by its operator Mkini Dotcom, to set aside the leave granted to the attorney-general to commence with the contempt application.

Gan, who co-founded Malaysiakini together with chief executive officer Premesh Chandran in 1999, vowed that the portal would vigorously fight the contempt charge.

Idrus had initiated the contempt proceedings over five readers' comments in a Malaysiakini news report published on June 9 which have since been removed.

The court also ordered both parties to refrain from making comments on the matter - which has prompted various organisations, both in Malaysia and abroad, to express concern over the implications of the legal action – until the day of the hearing.

Should Malaysiakini and Gan be found to be in contempt, sentencing could be handed down on the same day. There is no legal limit to the penalties for contempt of court.