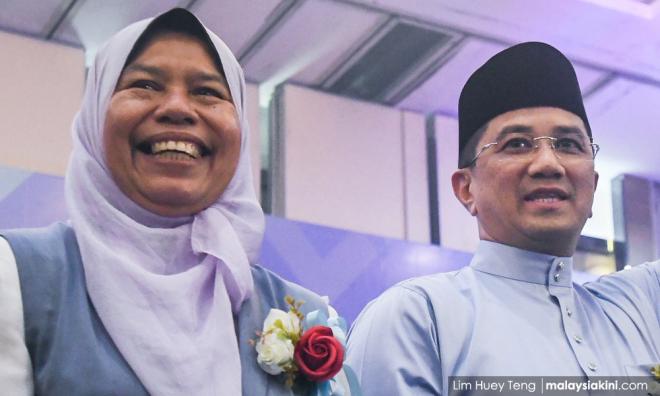 YOURSAY | Onus on S’gor MB to win back Gombak, Ampang for PKR

YOURSAY | ‘Amirudin is giving too much credit to Azmin and Zuraida.’

No easy road for Azmin, Zuraida to win in GE15: MB

Bobby0: The people voted mostly along party lines in the 14th general election.

Former ministers and PKR leaders Azmin Ali (Gombak) and Zuraida Kamaruddin (Ampang) won their parliamentary seats through the effort of the work done by the PKR grassroot leaders and those who also went around helping them day and night.

It was not won by their individual effort or through their own capabilities. The people of Gombak and Ampang are not going to forget the act of betrayal by these two.

Zuraida’s aide Nor Hizwan Ahmad can deny their act of betrayal all he wants, but the facts speak for themselves.

These two constituencies are in Selangor. Any effort to improve the lives of the people - even the construction of any building that will help the residents there - have to go through the approval of the menteri besar (MB) and its excos.

So, Nor Hizwan can stop dreaming as the general election is not like a by-election where all politicians can come and campaign. Every candidate is mostly on his or her own.

As for Amirudin Shari, for an MB to say it’s an uphill battle for PKR to reclaim the seats from these turncoats shows how incompetent he is.

These constituencies are under your jurisdiction, MB. All you have to do is to make sure their needs and problems are attended to as quickly as possible.

Set up a committee under your office to prioritise these two major parliamentary seats. You need the numbers in the next polls to form the government. Every parliamentary seat in Selangor counts and can be won if you do your homework effectively.

Why keep repeating the mantra of Malay majority? Are Malays not normal people? Like all other races, their needs are the same.

What more, as a Malay leader, you should understand their needs better, so stop finding excuses and burn the midnight oil if you are really interested in wrestling these two seats from Perikatan Nasional (PN).

Otherwise, it may sound like you have another agenda.

Clever Voter: Amirudin should not worry over the Malay factor in recapturing the seats from the rebels.

There are voters aligned to party loyalty rather than individuals. It is therefore about how the voters regard the performance of local government.

Selangor is home to many more informed voters, and it would be a surprise if Azmin and Zuraida would be able to retain the votes they enjoyed in the previous general election.

Century Egg: Amirudin is giving too much credit to Azmin and Zuraida. Who says it's difficult for PKR to wrestle back Gombak and Ampang in GE15?

The voters can't wait to rid them from their constituencies. Just ask around, they will tell you how disappointed they are with these traitors.

Iphonezours: Nor Hizwan, you are wrong. People won’t forget traitors, especially to the extent that they betrayed the voters and brought down a democratically-elected government.

You can say and deny as much as you like until the cows come home, but these people are at the mercy of the voters.

Korkor: I am a voter in Ampang and I felt truly betrayed by the MP whom I had voted into office in 2018. We are going to teach her a lesson come GE15.

If PKR contests the seat again, they shall have my vote and she can forget about being voted into office once more.

Nor Hizwan, don't take us Ampang voters for granted. You don't speak for us. The time will come to kick all of you out.

The Saint: As a neutral observer, I am very sure the voters in both constituencies will give Azmin and Zuraida the boot.

Urban voters are very sophisticated and they don’t like their MPs hopping unless they are convinced the previous party or coalition was infested with kleptocrats and corrupted individuals or it was incompetent in running the country.

I doubt Azmin or Zuraida can tick any of the foregoing.

Visionx: These two politicians are without a party. Which party is going to nominate them to stand?

If they are so confident that the voters will still vote for them, then stand as independents and we will see if they can still win.

They are the ones who engineered the downfall of the Pakatan Harapan government which the Ampang and Gombak folks voted in. They will be lucky if they are not chased away with sticks.

ScarletPanda9731: Personalities may count in certain cases, but generally voters go for the party. How many independents have won over 60 years? It’s rare.

Even parties have lost, what more party-less politicians.

Amoker: I am not from PKR. I think Azmin and Zuraida are going to lose badly in Gombak and Ampang respectively. Both locations have a lot of voters who are well educated.

On the news about “confidence”, apparently Zuraida and Azmin are looking for a non-urban, Malay majority area to contest. They are also avoiding meeting the voters of Ampang and Gombak, which says a lot.

Quigonbond: I wonder who's dreaming. What is the political policy platform for Azmin and Zuraida?

Does Azmin stand for needs-based economic distribution or a race-based one? Both are Harapan reform platforms. Will these two continue to take up these platforms?