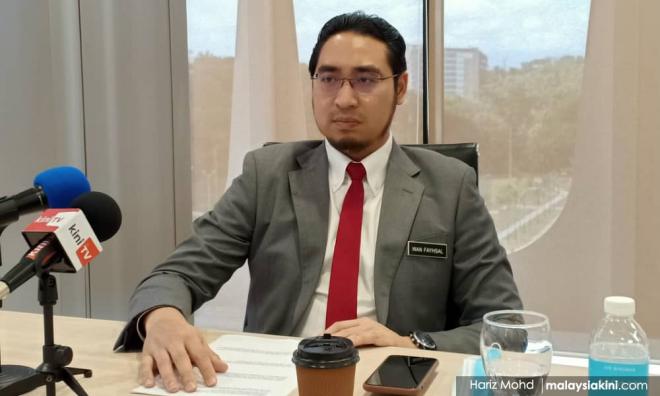 YOURSAY | It was Bersatu that didn't keep the Harapan bargain

YOURSAY | 'People had voted for Harapan, which includes support for Anwar as PM.'

Good Governance: Despite Deputy Youth and Sports Minister and Bersatu Youth member Wan Ahmad Fayhsal Wan Ahmad Kamal (above) claiming that it was painful to work with DAP, he gave no concrete examples of what he said.

It sounds like just differences in ideology, so likewise, I can theorise it was not easy for DAP to work with Bersatu either, given the political differences in the past. But I did not hear DAP complaining bitterly about Bersatu.

Secondly, Wan Fayhsal said one factor that caused the Pakatan Harapan government to fall was the request for former Bersatu chairperson Dr Mahathir Mohamad to step down from the prime minister position and give way to PKR president Anwar Ibrahim.

Wasn’t that agreed between them? So, why then, was it painful when it was Mahathir and Bersatu not keeping their end of the bargain? I would think it is much more painful for Anwar and PKR instead.

Finally, given his lack of credible explanation, I can imagine Bersatu members are a group of self-serving politicians willing to betray their comrades at the slightest hint of challenges.

On the other hand, PKR, DAP, Amanah and Warisan stuck with one another, in good times and in bad, and they earned my respect.

Siva1967: Wan Fayhsal, since you are in the government and also have inside information when you were with Harapan, please spill the beans on DAP and tell all about their shenanigans for the benefit of all Malaysians.

What bad deed or deeds are DAP guilty of that may have caused you and your president, Muhyiddin Yassin, now the PM, to ditch the people’s mandate after putting so much of effort to dethrone BN’s 60 years in power?

I am certain that right-thinking Malaysians from all walks of life, cutting across race, religion and creed, would love to hear (with proof) about DAP’s wrongdoings.

If you are such a righteous person, I am certain everyone will “support” you in your effort to save Malaysia from these “wolves in sheep’s clothing”.

PurpleWolf4058: It is very easy now to blame DAP. Unfortunately, DAP happens to be supported mostly by non-Malays so it is also easy to just say it's a racist party, even though BN and Perikatan Nasional (PN) parties are mostly single race parties too.

In case people forget, it was DAP veteran Lim Kit Siang, the late Karpal Singh and a few morally upright politicians who gave a major part of their lives fighting against corruption to give Malaysians who care some hope.

For decades they have voted for Umno, but look who is using this electoral trust to betray the country - Umno.

Umno elites take it as their right to plunder the country’s wealth like there is no tomorrow. Now, Malaysia must borrow heavily to cover this huge debt caused by the 1MDB scandal, and this will affect our future generations.

If Malays of today cannot think and articulate what the future will be for the Malays of tomorrow, then this generation is truly lost, and with that too, the future of Malaysians in general.

Anon 93751028: Wan Fayhsal said Bersatu was “forced to be patient and tolerate DAP”. This is because they insisted on following the rules?

Goodness, that must have been so difficult for those used to cutting corners and treating rules and proper behaviour as mere speed bumps to be ignored or removed.

And anyway, who is this young upstart? Nobody elected him, he's a senator who slid in through the backdoor with all the others.

Cogito Ergo Sum: DAP was indeed an impediment to the extravagant spending because of their frugal ways. Yes, that would have been painful, especially when they also went by the book.

Wan Fayhsal, your candour speaks volumes about you and your party’s prejudice against integrity and honesty. But the worst part for you was to have a finance minister holding the purse strings coming from the DAP.

Mahathir knew that with this appointment, the coalition would not last. You were a small part of a grand design to bring down Harapan and you played your role to the letter and spirit.

You have made sure that the DAP will never be part of any federal government because they don’t play your game.

Red Cicak: This is an interesting excuse for Bersatu’s reason to exit from Harapan.

However, the people voted for Harapan, which included DAP's ideology and support for Anwar as PM. This was the voters’ wish, and it is not for Bersatu to decide for itself.

Bersatu has betrayed the rakyat, and it will pay the price in the next election. We feel cheated and will not forgive you.

Johor Umno deputy chief Nur Jazlan Mohamed has already given notice to Bersatu that Umno will not concede all its traditional seats to Bersatu in the next general election.

Bersatu will similarly face more painful experiences with Umno, and also PAS, in the other states. At the same time, Harapan parties will not give way to Bersatu, which won its current seats when it was part of the Harapan coalition.

Demi Rakyat: Wan Fayhsal is correct. To be loyal to the rakyat, to do the right thing, to stand up against corruption, to care for the rakyat instead of being selfish and greedy for personal gain, all of these things are painful for Wan Fayhsal and his gang.