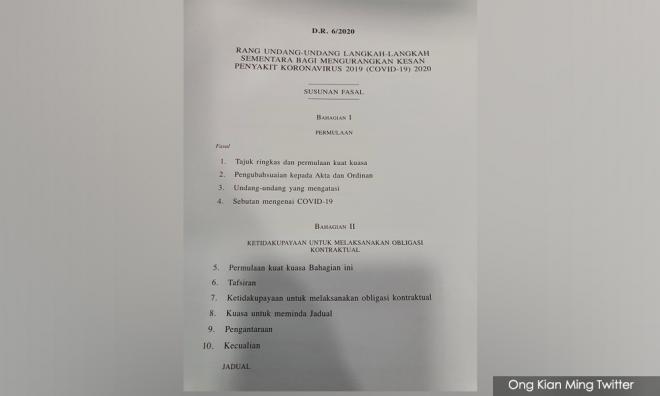 MP SPEAKS | Covid-19 relief bill is too little, too late

MP SPEAKS | The long-delayed “Temporary Measures for Reducing the Impact of Coronavirus Disease 2019 (Covid-19) Bill 2020” was tabled in Parliament for the First Reading on Aug 12, 2020.

This is more than six months since the MCO was declared on March 18, 2020. Furthermore, if certain legal actions and claims commenced or were concluded before this bill comes into force, the protections provided by this bill would not apply to these actions. In other words, this bill is too little too late and does not provide the necessary relief to the groups most affected by the MCO shutdown.

Section 7 of this bill is supposed to protect parties who cannot perform their contractual obligations as a result of the MCO shutdown. But Section 10 of this bill also states that “Notwithstanding Section 7, any contract terminated, any deposit or performance bond forfeited, any damages received, any legal proceedings, arbitration or mediation commenced, any judgment or award granted and any execution carried out for the period from 18 March 2020 until the date of the publication of this Act shall be deemed to have been validly terminated, forfeited, received, commenced, granted or carried out’. Section 10 effectively negates the protections provided by Section 7 to those most affected by the MCO shutdown.

For example, if you were a retailer renting a shop in a shopping mall and had your rental contract terminated by the shopping mall owner in July 2020 because you were not able to pay your rent during the MCO, then this bill will be irrelevant to you.

It is highly likely that Section 10 may have the effect of encouraging MORE potential claimants to quickly file their legal claims against companies in the next few months, BEFORE this act comes into force.

There are other loopholes in this bill which also weaken the relief it is supposed to provide.

For example, Section 20 of this bill increases the minimum threshold of debts owed by a debtor before a creditor can commence a bankruptcy petition from RM50,000 to RM100,000. This is a positive step, since the amount of unpaid debts by companies or individuals may have increased beyond one’s control during the MCO period.

The same kind of ‘loophole’ can be found in other areas such as taking possessions of goods in the event of a default under the Hire Purchase Act 1967, defaults for instalment payments under the Consumer Protection Act 1999, late payment charges imposed by the developer against the property purchaser under the Housing Development (Control and Licensing) Act 1966 and the seizure of assets in lieu of rental arrears under the Distress Act 1951.

In addition, the poorly specified mediation clauses (Section 9 of the bill), which are lacking in detail, will further motivate more parties to file legal claims and suits in the next few months BEFORE this bill comes into force.

What makes this bill even more frustrating is the fact that we had many months to study what other countries have done, including Singapore. Singapore started their own lockdown on April 7, 2020. On the same day, their version of the Covid-19 Relief Bill was passed.

The main purpose of this Singapore bill was to offer temporary relief to businesses and individuals who are unable to perform their contractual obligations due to the Covid-19 pandemic. The level of detail with regard to the protection measures in Singapore’s version of the bill is much more substantive compared to Malaysia’s Covid-19 relief bill.

Just to give one example, Singapore’s bill even specifies that a landlord cannot draw down a renter’s security deposit to pay for rental arrears during the period of the lockdown (as per Section 19S of the Singapore bill). Singapore also amended its Covid relief bill on June 5, 2020, in order to provide more relief including cash and other grants to ease the economic pains arising from the lockdown.

Malaysia could have provided a more comprehensive Covid-19 relief bill during the parliamentary sitting on May 18, 2020. This was only two months after the start of the MCO and businesses still had time to seek proper relief and protection.

Instead, the Perikatan Nasional government - which was not the government you voted for - refused to convene a proper sitting. Six months later, what we have is a watered-down Covid-19 relief bill that is full of loopholes and comes too little, too late.

ONG KIAN MING is the Member of Parliament for Bangi and assistant political education director of the DAP.